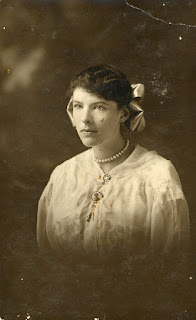 
Zillah Dredge had much to tell about her amazing life when she was interviewed in 1979. She had endured hardships like the First and Second World Wars, The Great Depression, suffered the shattering loss of a child and the premature death of her beloved husband. Yet she had many joyous moments mixed in with the tough times. Her long life, lived entirely in Campbelltown, saw many changes to her beloved home town and she recalled some amazing stories and characters in her interview to the library. I thought I'd share some of her thoughts with you.

She was born Zillah Victoria Cooper in a house on Camden Road in 1897. Her father drove a bullock team. Not long after the family moved to a house in Broughton Street, then to Allman Street and then again to Airds Cottage, where the Campbelltown Craft Society now meet. She referred to it as the Red House when she was living there. Her first school was the Catholic School on Old Menangle Road where Quondong is today and then at Miss Clark's private school in Cordeaux Street.

Zillah recalls how her mother would tell her the story of how her grandfather allegedly saw the ghost when returning home from the markets on his bullock dray one night. 'I think the spirit he saw was more of the drinking variety than ghostly" she said. "We sort of grew up with Fisher's Ghost; it was something that we always accepted".

Zillah married her husband Ray during the war years in 1916. The happy couple married a few months after Ray enlisted. She recalled that it was a war romance which was "pretty hard to take". She continued: "I can remember coming home crying on the mail train and someone saying "it is so sad", but you got accustomed to it". Their first home was in a house next to the Club Hotel (today's City Hotel). They then bought a milk run which they ran almost up until World War Two. In this time she and Ray lived in three more houses: in a brick house on the corner of Oxley and Dumaresq Streets; in a house in the middle of Queen Street that belonged to Sam Bursill; Queen and Dumaresq Streets where the 7-11 stands today.

The Depression hit the family hard and Ray was forced to supplement his income by trapping rabbits at Douglas Park, selling the skins and providing local butchers with the carcasses. Families like the Dredges had to improvise just to live. Zillah's daughter Joyce recalled picking blackberries to make jam and catching rabbits to put in a stew. In the late 1930s, just as things were beginning to pick up, their two horses and the cart were stolen. With no money to replace them, Ray had to give up the farm and sell their milk and ice run business.

Zillah and Ray had five children. The youngest Royce died when he was only two in 1935. Zillah recalled that this was the only unhappy time in her life. Her third youngest was son Doug who, according to Zillah, got into more trouble than the others put together. She recalled an amusing story about him in her interview: "For instance the old Camden tram. He was keen on mushrooms and he was out mushrooming and he was coming home and was caught on the bridge and the tram was coming. He lay down and the tram went over him. He had a silk shirt on and I searched high and low for that shirt and never knew where that shirt went to until we moved the wardrobe and there was a small crevice behind it. Right pushed against the wall where you couldn't possibly reach it was that shirt covered in oil where the tram went over him. He said he had to do something so he lay down."

The family moved again in the late 1930s to 303 Queen Street in the house now known as Dredge's Cottage. Zillah lived here until just before her death in the late 1980s. She spoke fondly of her days here. One day that wasn't so pleasant was in 1972 when a truck loaded with roof tiles crashed through her front door. "Fortunately I was next door with Mrs Taylor who had the shop next door". She had been talking on the telephone for about ten or fifteen minutes before the truck came crashing through. "The truck had swerved to miss a car, hit the car and swung it around about three times, came in directly over the veranda and right in".

Zillah took an active interest in sport and making bark paintings. She was involved in the CWA and Legacy. Her husband Ray died in 1966.

Zillah's long and happy life came to an end in June 1988. She was buried with her family in St Peter's Cemetery. The house in Queen Street, Dredge's Cottage, became the Veteran's Recreation Centre. 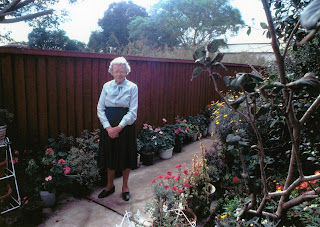 From the Trenches to Sewer Lane: A Story of the Dredge Family by Des Lowe