Campbelltown's first McDonald's restaurant dates back to 1976. This was one of the first McDonald's restaurants in the Sydney metropolitan area. The original restaurant was located at the same position as today's building on the southern end of Queen Street. CC Tyre Service occupied this spot prior to McDonald's. The restaurant opened for business on Monday 5 January, 1976. More than 80 local people were employed to staff the new McDonald's which was built at a cost of $250,000. The building in Queen Street was considered to be a modern design and a significant improvement on the company's other restaurant chains. The new manager Tony Puccio estimated that the restaurant would turnover $15,000 weekly. Compare this to today! Take a look at the advertisement for the new "Queens Street" chain that appeared in the local newspaper, the week it opened. Imagine paying 25 cents for French Fries (described as "chips" for the uninitiated) and 25 cents for a coke! 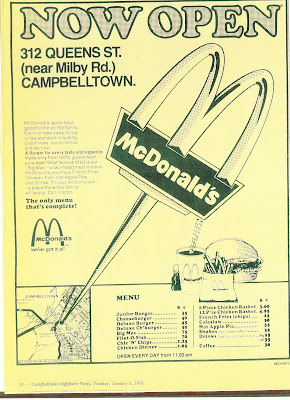 It seemed Campbelltown was gripped with McDonald's fever after it first opened. On 7 February, a month after the opening, an enormous record-breaking crowd was drawn to an appearance by Ronald McDonald at the restaurant.

When the Queen Street McDonald's was taken over by Ken and Maureen Tagg in August 1984, they changed the restaurant's image, transforming it to depict Campbelltown's pioneer origins, complete with a homestead style verandah. Ken Tagg became one of the town's leading business identities. He had already opened a McDonald's at Minto in 1982 and by the late 1990s would own a dozen local outlets. He invented the Happy Meal and his generosity to local groups saw him voted Citizen of the Year in 1994.

The Queen Street restaurant made a number of improvements over the years, including a new drive-thru service on 5 January, 1981, exactly five years after it opened. This was regarded as cutting edge technology for the day. In 1983 a bomb hoax made headlines after the restaurant was forced to evacuate.

In 1987 a new location was opened in Woodbine. The Queen Street building was demolished in 2005 for a new restaurant on the same site. This new building was set further back from Queen Street. 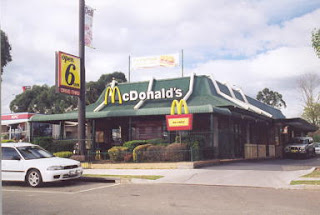 The original "Maccas" built in 1976. Note how close it was to Queen Street.
Posted by Andrew Allen at 15:43