More about that photo 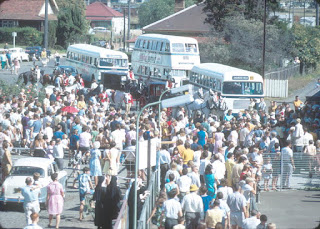 Our mystery photo from Wednesday's blog will now be identified. It was taken during Campbelltown's celebrations for Campbelltown's sesquicentenary, Captain Cook's Bicentenary and the Festival of Fisher's Ghost. The date was April 11 1970 and was a memorable one for the town. The highlight of the day was the opening of the newly renovated 'Glenalvon' in Lithgow Street. At 1.30pm an arrival of an historic train at Campbelltown station brought mayoral guests which were then conveyed from the station to 'Glenalvon' by coach. One of the coaches in this photograph was more than likely used for this. The official opening of 'Glenalvon' took place at 2.20pm and slides of historic Campbelltown were shown for the rest of the day at the house. The celebrations for the three milestones lasted for two weeks, concluding with the crowning of Miss Spirit at Bradbury Oval on Sunday the 19th of April.

The photograph was taken outside Campbelltown Railway station, looking in a southerly direction. The three buildings in the photo are long gone. The building on the right was the old station master's house that was demolished the same year. The other two houses in the background were in Patrick Street. The larger house on the left was 'Carmel' owned by the Vardy family.