Campbelltown was buzzing with excitement on the day Sir Henry and Lady Parkes paid the town a visit. It was 1891 and Parkes was the Premier of New South Wales at the time. A huge crowd turned out to greet them at the railway station and listen to his speech made nearby. He was a huge figure in the colony and heavily involved in his attempts to federate the colonies. Despite his poor physical health after a recent accident involving a cab, he was still a formidable opponent in Parliament.


The reason for Sir Henry's visit was the Encampment of the Volunteer Forces for which Campbelltown was selected to host in 1891. This was a training camp for military volunteers and was a major coup for the town. A report in the Freeman's Journal described the arrangement of the camp "The Cavalry occupied the Rev. Mr. Alkins' paddock, on the eastern side of the Anglican Church, the Mounted Infantry were placed in a paddock adjoining St. Patrick's Inn, and the First and Third Regiments on the eastern side of Mr. Joseph Rudd's residence, and the remainder of the Infantry were located on the old racecourse."


The week following Parkes' visit was virtually a holiday for the townspeople. The streets from the railway station to the camp were spanned by triumphal arches, covered with fernery and bunting. The event even lead to improvements being made to the railway line. Men had to work day and night, in order to complete the duplication of the line as far as Campbelltown. Hundreds of navies were employed at ballasting, plate laying and bridge-making. Platform accommodation was also increased.


Henry's speech near the railway station, particularly his comments regarding federation, attracted loud cheers. He also entertained the strongest belief in the volunteer movement. At the conclusion of the address cheers were given for Sir Henry and Lady Parkes, the Governor and the Queen. School children then sang "God Save the Queen". After a luncheon at the headquarters mess, the visitors were shown over the camp, and returned to town by the half-past 4 train. 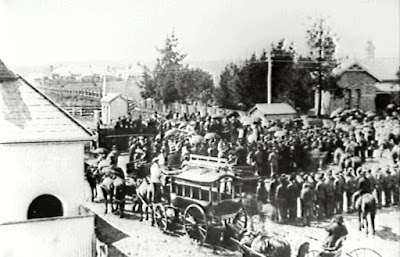 This is a photograph of Sir Henry Parkes' visit taken during his speech. Although very blurry, you can make out Henry's recognizable figure just to the left of the small shed on the right. (patience is required!)