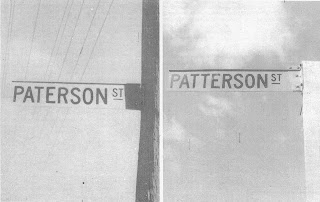 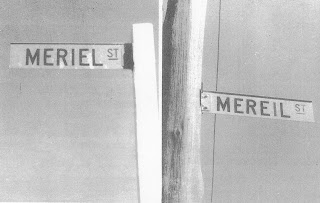 Spare a thought for the residents who lived in the above East Campbelltown streets in 1970. At one end of the street the name is spelt Paterson Street and at the other end Patterson Street? Same with the other street. Is it Mereil Street or Meriel Street? It seems we had one confused signwriter back then and a lot of confused locals!

For the record, Paterson Street was named after the famous poet Banjo Paterson and the correct spelling is with one t. Mereil Street is the correct spelling for the other. The unusually named street was invented by joining the first names of Neil McLean and his wife, Merle. Neil McLean was the name of the developer of Campbelltown's first estate named St Elmo. Work on the estate began in 1949 and was located around Broughton and Lindesay Streets. It was nicknamed "Snob's Hill" by local residents as the homes were large and brick with sweeping views. Mereil and Paterson Streets were part of St Elmo Estate.

The next issue of the Campbelltown and Airds Historical Society journal "Grist Mills" will be launched this Saturday March 18 at 'Glenalvon'. Written by Julie Crowley and titled "Living on the St Elmo Estates: The Story of One Man's Trust", it looks at what life was like on the estate through the experiences of those who lived there. Copies will be available from 'Glenalvon' after the launch.

McGill, Jeff et al 1995
Campbelltown's Streets and Suburbs: How and why they got their names
Campbelltown: Campbelltown and Airds Historical Society