Tear Down This Wall!

Campbelltown's second court house was built on the same site as the first court house and was officially opened in 1889. In 1963 major additions and alterations to the building were planned. This work was carried out during 1965 and 1966. The extensions were opened on 2 December 1966 at a cost of $180,000.

When the Minister of Justice, Mr J.C. Maddison made his speech on the opening day, he spoke of 'the very fine and necessary extensions to this court house'. The improvements to the inside may have been fine, but to the folk of Campbelltown the outside was a disaster. Part of the work included an exposed dark brick addition across the main level of the façade. Over the years this brick extension attracted many complaints due to its out-of-character look which was so unlike the original architecture. The high front iron palisade fence and gates with stone plinth were removed. 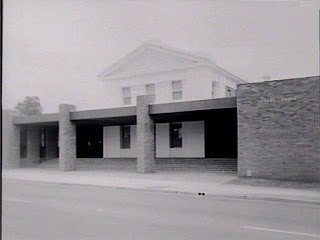 
To make matters worse, an ugly wall was constructed in the late 1980s. The wall hid the brick extensions but also hid the view of the lovely old court house from the street. The public, including local politicians, detested the wall. One Councillor summed up people's feelings when he said it was "a real crime to have a monstrous wall hiding such a lovely old building in the heart of the CBD". Another said "It's a blot on the landscape and should not be in the main street of any nice town".

In 1995 plans were made to have the facade restored to its former glory. The State Government stalled for some years, but finally in March of 1997 the town celebrated the ugly brick facade's removal. 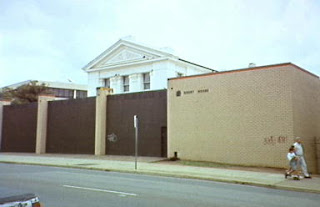 There is an interesting side note to this story. Sandstone pillars and a section of the original cast iron fence that were removed in the 1966 extension, were installed at the house of Max Dunbier, the former MP for Campbelltown. Mr Dunbier's father, who was the member for Nepean, bought the fence in the 1960s when it was taken down to make way for the brick extensions. While the fence was in storage in Liverpool, thieves attacked it with an oxy torch and stole the gates and several cast iron sections. 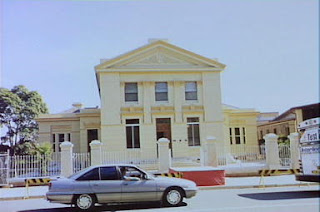 Back to it's original best: how it looked in 1999 (Stan Brabender Collection)