The Circus Comes to Town! 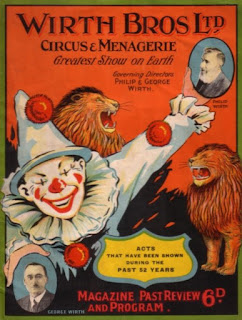 An ad for Wirth's Circus c1932. Wirth's made numerous visits to Campbelltown during their 83 years of touring the country

Step right up! Read about the escaping circus lions that sent Campbelltown into chaos. Learn about the day a freak wind blew down the big top. Did you know that a monkey once escaped a visiting circus here by jumping on an electric train! Read further to learn more about these stories from the history of the big top in Campbelltown.

Campbelltown has a long history of circus visits. In 1889 Fitzgerald's Circus performed to a packed house. One of the best features of their show, according to the Illawarra Mercury, was by the pony "Commodore" who enthralled the audience with his array of tricks. A contortionist also gave a display of his 'astonishing powers'. Other circus companies made visits to the town, such as Eroni's Circus in 1896. Two years later Bristol's Great American Circus visited the town. It featured for one night only 'European Eccentriques' such as August Roland, king of the high wire; the Bellmonts, trapeze and serial artists; Tom-Tom the famous clown and jester; Malic Zidoni, queen of the air, from the Cirque-de-Nouvre, Paris, who would accomplish her daring, awe-inspiring, death-defying terrific slide for life from the tip of the main pole to the ground amidst a blaze of colored fire illuminations.

One of the most regular companies to visit was the famous Wirth's Circus. In August 1907 a huge crowd of 400, almost a third of the entire population, watched their show of "side-splitting clowns, wild animals, wire-balancing acts, and Maori war dancers". They visited again in 1914 where the highlight was "Daredevil Desperado" who dived, from the roof, a distance of 50 feet, on to a crescent shaped wooden platform. It appeared that he must have been crushed to pieces, but he would slide along the platform, and in an instant was bowing and smiling to the astonished spectators.

Over the years there have been a number of locations where the Big Top has set up. In the early days this included a paddock across from Milgate Lane. Some years later the site of King's Paddock was used. This was on the corner of Queen and Broughton Streets where Campbelltown Council is now located. This was the site for many years. Other locations include between Lithgow and Dumaresq Streets between Moore-Oxley Bypass and Queen Streets. In later years a site around the vicinity of Marsden Park was used and also on the old showground site where Harlequins Rugby Club is based. 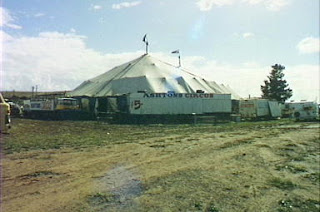 Ashton's Circus on a visit to Campbelltown in the 1980s. This location is believed to be near today's Marsden Park (Robertson Collection)

As mentioned above, there have been some unusual incidents over the years. On September 1, 1917 two lions escaped from a cage from Wirth's Circus at about 6am. This caused great excitement and panic and most people made themselves scarce! At first they prowled around a paddock and then wandered further afield. One ended up in Mr Kershler's garden under a pine tree and the other was captured in the Presbyterian Cemetery.

In 1934 an elusive monkey escaped from a circus camped at Campbelltown and boarded a train. After the train stopped at Liverpool railway station, frantic attempts were made to capture it. At one stage it was reported as 'bearing its teeth viciously at all who approached it.' It continued to fight off engine staff and at Cabramatta the stationmaster and guard endeavoured once more to remove it, but after mauling the guard's hand severely, the monkey hung on to a luggage rack. It avoided capture until it got to North Sydney! The monkey was returned to Campbelltown. It is not known if the circus company was charged for its fare.

In February 1979 a large scale disaster was averted when a freak wind caused a tent to collapse. The Great Hungarian Circus occupied a vacant allotment in Queen Street. The collapse occurred only 24 hours before it was to give its premiere performance. It was a financial disaster for the Urban family who had sunk $200,000 from their life savings into the circus. The only casualty was Karl Urban who was hit in the left eye by a support pole. The tent was damaged to the tune of several thousand dollars.

Do you have memories of the circus in Campbelltown? Please let us know what they are.

Email ThisBlogThis!Share to TwitterShare to FacebookShare to Pinterest
Labels: circus