Lane to an Arcade 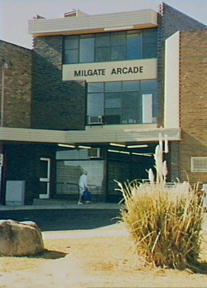 In early 1979 bulldozers began to remove the road surface of what was then known as Milgate Lane. The lane that ran between Downes Department Store and Flemings Stores was to be transformed from a road to an arcade to house shops and offices. The arcade would link the car park to the main shopping thoroughfare of Queen Street.

The transformation of Milgate Lane had begun some years earlier when many of the houses that lined the southern side were demolished. At one stage in the 1930s there were ten houses that stood in the lane. They ran from Queen Street all the way down to the railway line. In the early part of the 1900s, on the opposite side of the street, there was a paddock where circuses would often set up. A past resident named Eileen Duguid remembered Wirth's Circus using the vacant paddock. The houses were small two roomed timber dwellings, situated very close to each other. The names of the people who lived there in the 1930s included: Charles Selems; Thomas Curry; Charles Augustus Jones; Frederick Scott; Jack Hutchenson; Alfred Duguid; John (Chinnie) Hund and Robert Coogan who lived in the last house before the railway line. Other names living there before this included: Mrs Evans, Mrs Brookes, Larkins and Masons. A concrete car park now occupies this site. 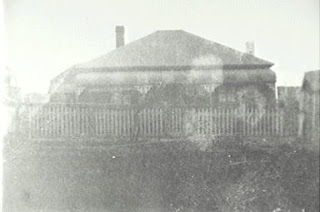 The Coogan family lived here for many years. It was the last house in Milgate Lane before the railway line (Clissold Collection).


Milgate Lane was named after Spencer Samuel Milgate who in the 1870s and 80s operated a produce store on the site now occupied by Milgate Arcade. He was born in Sussex in the UK in 1834. He moved to Australia with his parents in 1840 and took over his father's store in Campbelltown after his death. Spencer bought Eschol Park off William Fowler in 1878. Then tragedy struck when his mother and three daughters all died within two years of each other. He sold Eschol Park and moved to Sydney. Spencer Samuel Milgate died at Wentworthville in 1911. Milgate Arcade and the remaining stretch of Milgate Lane remind us of this early pioneer.