There had been nothing unusual about this particular Saturday afternoon in the late summer of 1952. Gatekeeper James Ashford was on duty at the Camden Road level crossing at Campbelltown where he performed his regular duties. Golfers enjoyed a leisurely round of golf at the adjacent course and the rest of the town were making the most of the perfect weather. Then all hell broke loose...

Crouched on a hill about 300 yards away was a 15 year old boy who started firing shots at James Ashford. The bullets struck the gatekeeper's shelter box, where he was summoning police. One of the bullets narrowly missed his head. He later took shelter behind a gatepost, and two more bullets ploughed into the post.

Bullets also whined over golfers on the golf course. One player dived into the creek for safety and another into a pond. Several shots also flew over a passing car. Local police then blocked Camden Road.

Two men then found the boy under a nearby bridge. Drawing their pistols, the policeman rushed the bridge and captured the boy. They took possession of a pea-rifle. He was charged with assault, discharging a firearm near a public street, and being a person under the age of 16 found in possession of a firearm.

Local newspaper photographer Norm Campbell remembered the day. "This was great news for the papers, it was Saturday morning and Sunday was a big day for news. The place was riddled with reporters and staff."

It turned out that the boy was from the Sydney suburb of Enfield. He was ordered by the court to attend the Police Boy's Club at Burwood two nights a week. The court was told by the police that when captured the boy's breath smelt of intoxicating liquor and he was unsteady on his feet. He also received a bond which prohibited picture shows, intoxicating drink and the handling of firearms for two years. The boy told the court that he was "very sorry" for what he had done. 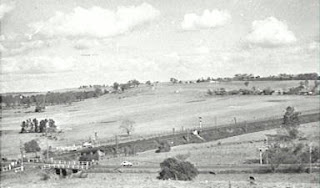 This is a photograph taken in the early 1950s. It shows what the scene would've looked like at the time of the shooting. The photograph overlooks the golf course with the Great Southern Railway line and the Camden Road level crossing at the bottom left. (Campbelltown and Airds Historical Society) 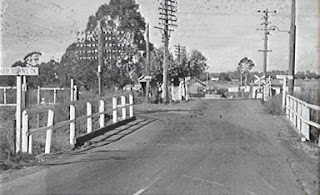 Bridge over Bow Bowing Creek next to the level crossing. This was almost certainly the bridge where the 15 year old hid under and was caught. (Campbelltown and Airds Historical Society).
Posted by Andrew Allen at 10:38