I'm forever wishing I could go back in time. To be able to walk the streets of Campbelltown 50, 100...even 150 years ago would be amazing. One of the buildings I'd make a priority to visit would be Ivy Cottage in Allman Street. There was nothing grand about it. Just a simple little cottage but one full of charm and character that many happy families called home.

Local storekeeper William Gilchrist purchased land in Allman Street and built Ivy Cottage on it for his brother, Rev. Hugh Gilchrist, a Presbyterian minister appointed in 1838 to take charge of Campbelltown and many other surrounding towns. The cottage became the Presbyterian Manse and served as such until about 1882. The cottage would've held weddings in its early years as Presbyterian marriages were not conducted in church but in private houses. 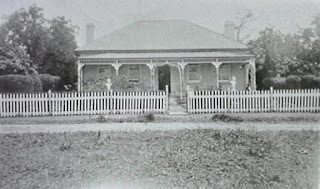 After Gilchrist's death in 1852, his brother sold Ivy Cottage to Alick Osborne. It then passed through many owners including John Hurley who rented it out after the death of his wife Mary in 1859. John and Ellen Thurston were living there in 1865. In 1882 it was owned by a W.J. Wilson followed by a Patrick Cullen who died in the cottage in 1893.

The cottage became home to the Vardy family some time around the early 1900s. It's unclear exactly when they moved in. The Vardy family numbered 12 with Michael and Mary the parents. Michael and Mary had lived at the cottage for a period prior to 1877 when it was still the Manse. When his father died, Michael inherited Springfields at Menangle, and he moved there. He returned to Ivy Cottage when he retired. 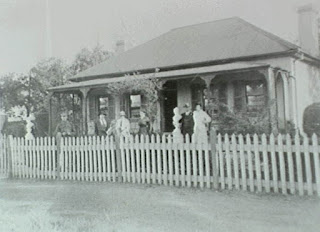 Photographs of the cottage show a building that was symmetrical with a picket fence around it. A newspaper advertisement in 1861 describes it as containing a dining room, drawing room, 3 bedrooms with attics, detached kitchen, servants' room and sheds. Also a flower garden in front and a spacious kitchen garden at the rear.

The cottage was occupied by members of the Vardy family right up until the late 1950s. In 1957 unmarried siblings, Cyril and Gertrude, still resided there. For many years piano music could be heard playing inside the cottage. Gertrude was the sister who played the most and apparently played so loudly as she was deaf. The piano was owned by her mother Mary who would play for many years as the organist for the Catholic Church. 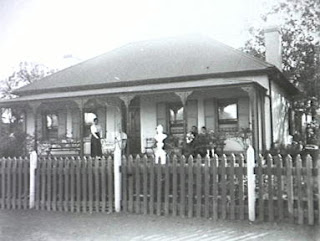 Another sister was Cora who lived with her husband in the same street as Ivy Cottage. Her husband would look after the garden at the back of the cottage and in the forties and early fifties kept between 200 and 250 hens in the backyard to supply the Egg Board.

Ivy Cottage was sold for re-development after 1957 when Cyril Vardy died and Gertrude moved out. I'm unable to locate an exact date for its demolition. It stood at 31 Allman Street.