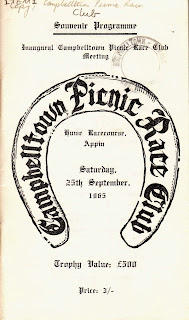 
It was Saturday September 25, 1965 and all roads lead to Appin for the inaugural Campbelltown Picnic Race Day at Hume Racetrack. The crowd was enormous with 5,500 people passing through the turnstiles. Mother nature turned on a sparkling Spring day and everyone asked "When is the next one?" The Campbelltown-Ingleburn News reported "Car boots were opened; portable coolers were taken out; in many cases portable barbecues were assembled; lunch baskets were opened; rugs and tablecloths spread out on the ground and the people sat down to dinner in the lovely rural atmosphere."The newspapers heavily promoted the meeting in the weeks leading up to it. The winner of the main race for the record was Dashing Emperor.

The first race meeting may have had a 'sparkling day' but luck was going to run out- in a big way! The race day was to be plagued by bad weather for much of the remaining 23 years that it was held. It started in 1970 when race promoter Diedre O'Dowd called the main race the Fisher's Ghost Cup. It seemed Fred wasn't impressed and Diedre recalled "The rain was so heavy the horses had to swim up the track, so we had to cancel." In 1972 after a rail from the old Fisher's Ghost Creek bridge was used as a finishing post the next four meetings were washed out (see my previous post on Our Ghost Post). Rain again forced it to be postponed in 1978 and the meet was washed out 4 years in a row from 1986 to 1989. Campbelltown Picnic Race Club was to have the worst abandonement record in the history of Australian race clubs. Two farmers from drought affected Ivanhoe in Western New South Wales attended an ill-fated meeting one year. They told the president that they would give the club $10,000 every year if they staged the event in Ivanhoe!

The race day also had its share of race falls. In 1977 a five horse fall in the Fisher's Ghost Cup marred the day. In 1983 tragedy struck when jockey Ted Savage died instantly after his head hit the inside running rail on the straight 100 metres from the barrier. He had earlier expressed his concerns that the horses might have difficulty in negotiating the very sharp turns on the picnic track. There were four other accidents on the track that day.

Despite the weather "jinx" and the tragic falls the picnic race day is remembered fondly by Macarthur people. The last race was in 1989.