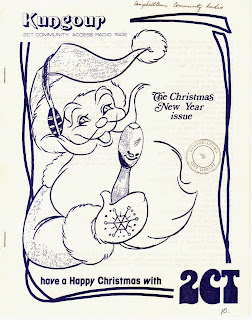 Campbelltown had its very own radio station as early as 1978. 2CT was Australia's first genuine community access radio station and for almost four years programs were broadcast throughout the district from two studios from a house on Campbelltown Road, Minto.

Plans for the station started early in the 1970s but it wasn't until 1977 that its licence was finally issued. The licence allowed the station to transmit for 116 hours weekly. The first broadcast aired at 2.30pm on May 13, 1978 with the 'extremely nervous' station announcer using the line "This is radio 2CT Macarthur 1390" to the applause of 200 people crowded outside the studio. The opening didn't go without a hitch however as the Post and Telegraphs Minister forgot to open the station! He eventually arrived 20 minutes after the scheduled time.

The station was a success. It included music, segments, sport and news programs presented by the Campbelltown-Ingleburn News.

After only 3 years however, the station closed down. A downturn in retail trade and accompanying sponsorships and tough government restrictions on advertising were the main contributors. On January 21, 1981 shareholders voted to wind the station up and the last broadcast was on the following Friday the 23rd. In less than three years the first Australian Community radio station was the first to pass away.

Campbelltown Library has part of the broadcast from that last night on air. The last song played was "Until We Meet Again" by the Goombay Dance Band. This was followed by an announcement from the station thanking those for their support as well as a 'dig' to those that didn't. The national anthem then played followed by silence. It has been digitised and about to be made available to the public.

Radio 2MCR which began in the late 1980s now provides the Campbelltown area with a community radio service.