William Mawson was not quite four years old when he came from England, with his parents Robert and Margaret Mawson and his younger brother Douglas, in 1884. The house where the Mawson family settled was in Plumpton. William and Douglas were educated at Woodstock (later Plumpton) Public School, Forest Lodge Superior Public School and Fort Street Model Public School. In their youth, both William and Douglas sang in the choir of St Andrew’s Cathedral.


William entered the Faculty of Medicine at Sydney University graduating with honours in 1904. He then became Resident Medical Officer at Royal Prince Alfred Hospital, Sydney. After his residency he practiced in Gundagai from 1906. Dr Mawson brought the first X-ray to be used in country NSW.


It is recorded that Dr Mawson came to Campbellown in 1908/1909. At this time Dr Mawson was offering honorary medical attendance and assistance to the community. The Campbelltown Bed Endowment and local Relief Fund Committee was formed in 1909 because Dr Mawson wanted to be able to provide free medicines to the needy. Fundraising was ongoing and enabled the Committee to endow a bed at Camden Cottage Hospital and the Campbelltown Cot at Renwick Hospital, Ashfield.  He continued to provide free medical services for those in financial difficulties. Dr Mawson was a member of the British Medical Association and Captain of the A.A.M.C. Reserve.


Dr Mawson bought the medical practice of Dr Dight who was a tenant of Glenalvon in Lithgow Street, Campbelltown in January 1910.  He built ‘Mulwaree’, a house and surgery in Cordeaux Street opposite St Peter’s Anglican Church in 1913.


Dr Mawson owned the Millhouse in southern Queen Street and had it converted to the Milby Private Hospital in 1925. Macquarie Theatre was owned by Dr Mawson, some of the sandstock bricks from the mill were reused in the construction of the theatre in 1926. It is said that the doctor wanted to provide a place for the youth of Campbelltown to have fun. The theatre was also used for jazz and old time dancing classes, ballet classes, balls, school speech nights, dance and euchre parties, variety concerts and even auction sales. Dr Mawson lent the Macquarie Theatre free of charge for charitable fund-raising purposes. The Ambulance Benefit night in December 1929, for example, was in support of the Liverpool and District Ambulance which served a vast area of Western Sydney including Campbelltown.


Dr Mawson was held in high esteem amongst the community. His services and contributions to the town must have been unselfish and kind. Full of compassion and drive to achieve the corner stones that communities are made of.


Mawson Park was named in honour of Dr William Mawson in 1937. Included were a pergola, shelter shed and entrance to the park. Two plaques were erected on the pergola: one engraved with ‘Commemorative pergola to William Mawson Esq., M.B. Ch.M’ the other with ‘Erected by the citizens of Campbelltown in appreciation’.


Sadly, in February 1931, Dr Mawson suffered a stroke and was unable to continue his practice. Therefore he retired and a social event at the Town Hall on the 24th July 1931 was held in honour of Dr Mawson and his wife.


Late in November of 1936 news came that Dr Mawson was a patient in Gloucester House, R.P.A. Hospital.


Dr William Mawson passed away at his then home in Turramurra on 4th June 1939. He is buried in St Peter’s Anglican Cemetery, Campbelltown.
By Cathy Mitford 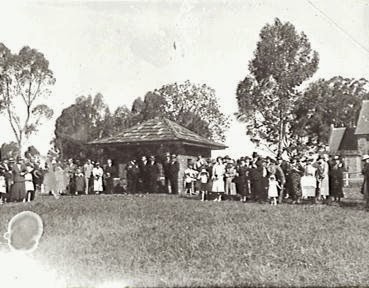 Crowds gathered to witness the unveiling of the memorial to Dr William Mawson in Mawson Park, Campbelltown 1929-30.