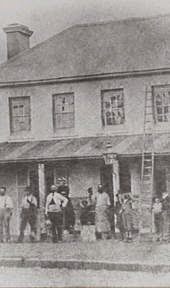 The Jolly Miller Hotel was built in the late 1840s at the southern end of Queen Street opposite Kendall’s Mill. The hotel was opened by George Fieldhouse who had followed his convict father to New South Wales in 1828. George’s two sons William and Edwin Hallett opened a general store next to the hotel in 1853. This building, which later became the offices for the Campbelltown and Ingleburn News, is still standing opposite McDonald’s restaurant in Queen Street.
George Fieldhouse was the licensee of the Jolly Miller until his death in 1880. An interesting side story regarding George Fieldhouse concerns a visitor to the town in the same year as George’s death. The traveller, a Frederick E Sawyer, noticed George sitting in front of the inn and began to quiz him about his knowledge of Fisher’s Ghost and to show him the spot “immortalized in story, where the ghost of Fisher made its appearance”. To his astonishment Fieldhouse stated most emphatically that there never was a Fisher’s  Ghost  or any other ghost in Campbelltown, at any time or in any place, or under any circumstances! He knew all the parties connected to the story. 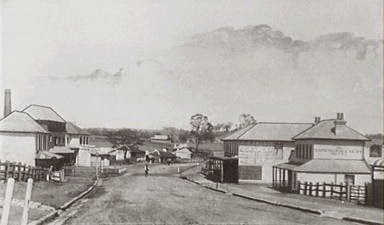 The Southern end of Queen Street showing Fieldhouse's Store and the Commonwealth Hotel (formerly Jolly Miller Inn) on the right. (Photo courtesy Campbelltown and Airds Historical Society).
After the death of George Fieldhouse the license to the inn passed through a number of hands for the next twenty years. In 1891 it was run by Elizabeth Cooper, Meyer in 1894 and Charles Stanley from 1896 to 1899 and William Day was the proprietor in 1900. That year the application to renew the license was opposed as the inspector ruled that it was not up to the requirements of the Act. The standard of accommodation was not such as the Act provided for. It was deemed “old and unsuitable for present requirements, the sanitary arrangements, ventilation and drainage not being up to date.” The improvements were made and in February 1901 the new proprietor Fred Mulholland applied successfully for a name change and the hotel became the Commonwealth Hotel. A new name and improvements heralded a new beginning for the old hotel.
The hotel was often the scene of various inquests in the early days. Examples of this include the inquest into Elizabeth Walsh’s death written about in my previous blog post. The hotel was in the news in 1904 when a man named Thomas Griffiths committed suicide in a paddock at the rear of the hotel. Thomas was living on the premises at the time.
In 1909 architect Alfred R. Payten designed alterations and additions to the Commonwealth Hotel.
The hotel licenses continued to change hands after the turn of the century with Henry Bridgeland, Helen Hutchison, Mr Reidy and John Williamson owning the hotel between 1912 and 1919. In 1917 Helen Hutchison was taken by surprise when an inspector fined her for remaining open past the allotted hours. A patron was also fined for assaulting and insulting the inspector when he forced the pub to close.

By the 1930s the Commonwealth Hotel was being promoted as the ‘First and Last’ and ‘19th Hole’- the house where sports meet. The license was transferred to the newly erected Good Intent Hotel in 1939 and the premises were converted to residential use known as the Commonwealth Flats. The building was demolished in the early 1960s. The site today is a vacant block next to the now Macarthur Legal Centre. 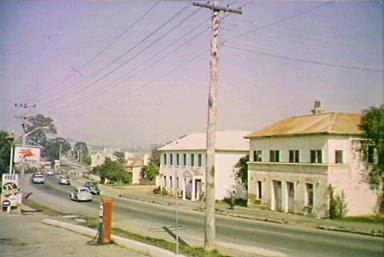