In the early 1950s the recently formed Leumeah Progress Association asked Campbelltown Council to find a suitable site for a park. About 12 acres was acquired and in 1955 named 'Orana Park', an aboriginal word for 'welcome'. It seemed an appropriate name considering the amount of new residents in the area.

The ground held regular sports carnivals and hosted some important rugby league matches over the years. In 1980 the Group 6 grand final played at the ground attracted a crowd of 10,000. In 1970 it had become home of the Campbelltown Kangaroos Rugby League team.

In 1983 the Newtown Rugby League club played their final season out at Orana Park. In 1985 a new grandstand was opened which attracted the Western Suburbs Magpies club to Orana Park. By 1987, it was the magpies home and three years later, was renamed Campbelltown Sportsground. This was due to the increased media and public interest in sporting facilities in Campbelltown in both the local and broader community and the similarity between the names Oran and Orana Park.

On May 2, 2010 a huge crowd witnessed the re-opening of the multi million dollar re-developed Campbelltown Stadium. The upgrade was funded by an $8 million grant by the federal government. 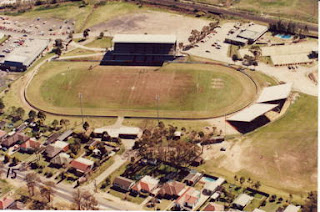 An undated photograph of Orana Park can be seen above.

McGill, Jeff 1995
Campbelltown's Streets and Suburbs: how and why they got their names
Campbelltown: Campbelltown and Airds Historical Society