Memories of George Frere and the "Crossing"

On 12 June 1976 Keith Longhurst interviewed his 86 year old father James Longhurst at Frere's Crossing on the George's River. The interview took place at the spot where the bridge crossed the river and was known as Frere's Crossing. The interview reveals valuable information about the early days of the crossing and the surrounding countryside. It also sheds some light on the man responsible for building the crossing- Georges Frere.

Georges Pierre Frere came from the Cognac district in the Charente in France. He migrated with his parents as a nine-year old boy in 1875. He was the son of a winemaker Francois Gaston Leonce and Martha Frere. They had grown grapes that were used to grow cognac.

Protruding from the rocky floor of the Georges River near Kentlyn is a series of old stumps, which once supported the bridge that spanned the waterway. The bridge provided access to Frere's farm. In 1893-94 the Department of Public Works contracted out to build this bridge at Frere's Crossing. It was George Longhurst, James' father, who laid the stone approaches to the bridge. The bridge had eight piles with four piles in the middle. The bridge itself was probably built by George and Jim Kershler.

I thought I would include some of the extracts from the interview that Keith Longhurst did with his 86 year-old father James back in 1976:

This is 12 June 1976 and I am at Frere’s Crossing with my father and he is now standing where his father did stonework on the George’s River Bridge or the Frere’s Crossing as it is now called. That was 75 years ago, what can you tell us? How old would your father have been when he did this, any idea?


This road at the end of Frere’s, it was here then.


It was there, but it wasn’t as good a road as it is now. It had a good bridge. It was very rough; you would go out of one pothole into another.


How long do you reckon that road has been there? Could you work it out?


We don’t know who built the road, but we always believed it was convicts. You could see where they blasted it with gelignite.


I think that the bridge was built before that Keith when I think over it, because when we came down here, my mother and Mrs Taylor who lived opposite, Mrs Piggott’s mother, they used to come down here in the old cart. We used to have about 12 kerosene tins to take water home and they used to do their washing on the bank there. That went on for some time in the first year that we here because we had no water up there. I remember seeing wallabies up there lying on the rocks when they were washing here.


Talking about wallabies, did you ever see Koalas here?


Oh, dozens of them. I don’t mean in one time, but in the years that I lived in the old bush, which I suppose, was about 8 years, we used to see them often, one or two perhaps in a day. There were quite a number of them throughout the country. 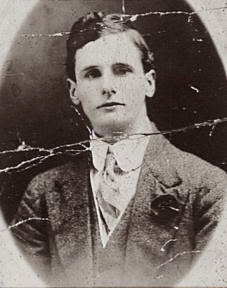 Further into the interview James Longhurst talks about Frere:
What sort of a house did Frere have? Have you any idea?
He had an old slab place. He had two places; one was built of weatherboard if I remember right. The other one was the place where he cooked and had his meals. I remember once we wanted to get off a bit early and the fellows sent me up to turn the clock on. I went up and I didn’t know much about a clock. I got hold of the thing and I started twisting. Anyway I heard his cough, everyone knew his cough, and he was just behind. I put the thing down and scooted out the other door and the alarm went off.
What sort of cough did Frere have? I’ve heard you speak of this cough.
I was going to talk about his cough. He had a very peculiar cough. You’ve asked me and I’ll have to go a little way and relate. Once Bert was sent to get Darkie, the old horse used to take us about, as it was a pretty big place that he had from the vineyard to his home. Bert was sent to get the horse and he found the horse and we found Bert, five of us and we all piled on behind Bert on the horse. I was on the tail just hanging on as there wasn’t any more room and presently around the corner we heard the old fellow coughing and if you could have seen us slide off that horse. Only Bert remained. I went over his tail and the others went off the side. That cough was what I heard when I went to do the clock.
The last time I heard that cough was the last time I saw Old Frere. I don’t talk out of disrespect when I say old; we always called him Old Frere. We were children and he was about 40 I suppose. I was working in Sydney when I was about 16 and a half and I was going from the railway up to Bow Street and I got up to Crown Street and I was walking along there and I saw an old man going along there. I didn’t take any notice of him and presently he coughed and I looked round and sure enough it was Old Frere. I was glad to see him and I don’t know why I didn’t talk to him. It was he and he was walking along there coughing and only Frere had that cough. That was the last time I saw him.

I don’t know how much he made or how he got rid of it. I know carts used to come from this direction past our place at midnight and two in the morning, that sort of thing. Why I don’t know. 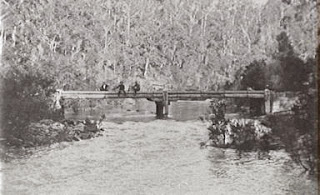 HOLMES, Marie
"Snippets of History of the Georges River"
In Grist Mills
Vol.16, No. 1, p