When the Centre Court Tavern on the corner of Queen and Railway Streets was opened in November 1985 it replaced a much loved hotel by the people of Campbelltown. The site was first occupied by the Forbes Hotel, erected in 1827 by Daniel Cooper and opened by George Tait. It contained 18 rooms and the long room set aside for banquets, dancing and public entertainment. It was advertised as the 'best hotel in the country' and provided entertainment which was described as including a 'mesmerist, phrenologist, laughing-gas man, lantern lecturer and a panoramist!'

The Forbes Hotel was replaced by the Federal Hotel around the time of federation and was eventually purchased by Herb Lack in 1922. Herb was the grandfather of local solicitors John and Jim Marsden.

The hotel became well-known for its special house whisky with a guarantee of 20 years maturing in wood in Scotland. Lack claimed 'its quality creates a demand  and maintains its sale'.

The business was operated for many years by the daughter of Herb Lack, Phyllis or 'Tib' as she was better known, and her husband Guy Marsden. Mr Marsden took over the licence in 1951 and kept it until 1972 when it was sold to the Taylor Freeholds Pty Ltd. John and Jim Marsden were born and raised in the hotel as was their father.

Within the bar was an implied social division. The public bar was cheaper than the saloon bar which attracted more the professional merchant or grazier class. The public bar drinker reportedly showed no animosity towards these "silvertail' drinkers on the other side however.

According to one of our oral history interviewees, an SP Bookie set up a business in the hotel at one stage!

Almost every old local that I ask what was the best hotel to drink at in Campbelltown in days past, the answer is inevitably Lack's Hotel. The hotel was sadly demolished in June 1984. 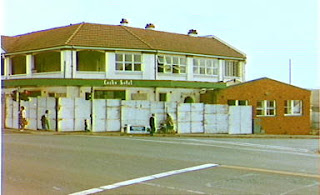 The photograph above is of Lack's Hotel just before it was demolished in 1984.