Performing their duty or "legalised vandals"?

The demolition one quiet Sunday morning in 1981 of an old curiosity shop divided Campbelltown. The shop was built in 1840 and was once owned by former mayor C.J. Marlow who used it as a drapery. It stood between Dredge's Cottage and the old fire station and Town Hall Theatre.The last owner of the building was Gladys Taylor. Mrs Taylor left instructions in her will to use the proceeds of the sale of the land to go to institutions assisting the suffering and needy. This amounted to more than $60,000. Yet in carrying out their lawful instructions under the terms of her will, her executors were dubbed "legalised vandals" by some sections of the community.

The building was dilapidated and in a sad state of repair.The flooring was rotted and the stairs were too unstable to carry any weight. It was also not classified by the National Trust or Heritage Council. Yet it was just over 140 years old and recommended to be retained as it was seen as part of the old facade of the buildings lining the southern end of Queen Street. The demolition resulted in many letters of disapproval from some sections but as many in support of the demolition. One executor told the local newspaper "It was an old patchwork property and not even as 'historic' as at least one man still alive in Campbelltown today".Surprising then that this 140 year plus person escaped the attention of the world!

The demolition of C.J. Marlow's former drapery was just one of many fine historic buildings demolished in Campbelltown during the 1980s in the name of progress. One must ask however, if their demolition has added to the appeal and character of the town's business centre. At least in this case the generosity of Mrs Taylor meant that some people at least benefited from Campbelltown's loss.

The site of the shop is now the drive in entrance to the outside car park for Campbelltown Mall between Dredge's Cottage and the Town Hall Theatre. 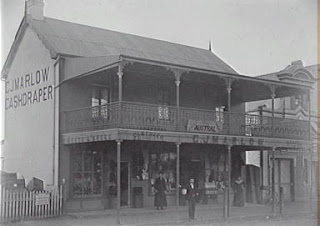