Whenever I ask the older generation of Campbelltown where they swam as children the answer is invariably at the Woolwash. The area known as the Woolwash is 4km east of Campbelltown and is a deep gorge along the Georges River around its junction with O'Hare's Creek. Although rumour has it that the Woolwash was at one time used for washing wool, there appears to be no evidence to support this story. In the early days people used the water for their own purposes, and also to water their cattle. But it was as a swimming hole in the searing summer heat of Campbelltown that the Woolwash gained its reputation.

It was during the 1930s that the Woolwash began to be the town's most popular swimming and picnic area. Many Campbelltown residents of that time remember crowds of about 100 people sitting and sunbaking on the sandy beach on the eastern side of the river. Unlike the muddy water hole at Bow Bowing Creek, the Woolwash water was normally very clear, unpolluted and nearly always flowing. It became so popular that in 1946 a kiosk was built and leased by Fred Lowe. In 1955 council constructed a parking area near the top of the Woolwash road. Prior to its construction there were often up to about 50 cars parked along the road down to the turning area on a good weekend. A second car park was constructed in 1969 along with a kiosk and dressing sheds.

The area around the Woolwash was very popular for boy scout camps between the two world wars. Two camping areas were established in the 1930s about 200 metres up O'Hare's Creek, one on either side of the creek.

According to local resident Col Braithwaite, broken glass bottles were a major hazard in the area. People drank the contents of the glass soft drink bottles, threw the bottles into the water, then proceeded to throw stones at the bottles until they broke and sank. Many children often received bad cuts to their feet. Still, this was a small price to pay for a day at Campbelltown's charming piece of paradise. 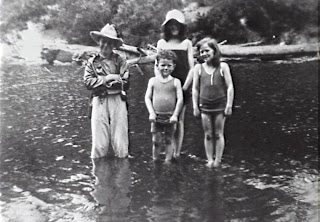 4 unidentified children of the Denison family at the "The Woolwash" A. Denison Collection