Gracius Joseph Broinowski, artist and ornithologist, was born in Poland in 1837. He sailed to Australia in 1857 on a windjammer from London and first went ashore at Portland in Victoria. Broinowski soon began painting landscapes and scenes of various towns around Victoria, New South Wales and Queensland. After settling in Sydney in 1880 and teaching painting to private pupils and at colleges, he then lectured on art and exhibited at various showings of the Royal Art Society.

Broinowski was commissioned by the Department of Public Instruction in New South Wales to draw pictures of Australian birds and mammals. These would be hung in classrooms in many schools. They later became bound and the Mitchell and National Libraries showed them as "Birds and Mammals of Australia". In 1888 he published "The cockatoos and nestors of Australia and New Zealand".

Broinowski had begun in 1887 to prepare a series of volumes entitled "The Birds of Australia". The works were accomplished while he was farming at Wedderburn and was completed in 1891. He took up a tract of land on today's Minerva Road, intending to divide it amongst his sons, and for some years endeavoured, with the help of his sons, to make farming pay. This was not a success however and he lost money. Although he was able to build an attractive home with outstanding gardens his financial difficulties meant he was unable to keep it going.

The house he built at Wedderburn with his wife Jane and children was called "Morning Glory". It was one of the earliest cottages built in Wedderburn. The building as it stands has a series of three pitched roofs (resembling a saw tooth roof). The building is an unusual design but it appears most of the original outside fabric has been removed. It is listed under the New South Wales Heritage Act. Today it is used as a church camp or retreat.

Gracius Broinowski died at Mosman on April 12, 1913. His reputation survives not just an artist but as an advocate of fauna conservation. 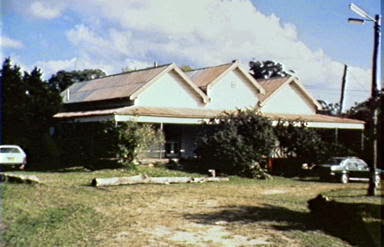 "Morning Glory" is now the Christian Campsite at Wedderburn. This shot was taken in 1984 by Verlie Fowler (Fowler Collection).