Imagine the scene: its a cold Saturday night in early September of 1928 and a large crowd of Campbelltown locals have gathered outside Charles Tripp's Silver Star Garage at the corner of Queen and Dumaresq Streets. They are all rugged up against the cold to listen to a broadcast of the fight at the Sydney Stadium between the Englishman Kid Socks and the Australian Archie Cowan. But why have they gathered outside a garage in Campbelltown?

Charles Tripp was Campbelltown's pioneer radio buff. He was a member of the Wireless Institute of Australia from 1914.  Radio was very much in it's infancy at the time Tripp became interested. Charles would have learned about radio from two magazines of the period catering for the home constructor- The Wireless Weekly of Sydney and The Listener In.

In 1925 Charles built a 4 valve wireless set that was reported as a box-like structure. He then fixed a loud speaker on the front door of his garage on the corner of Queen and Dumaresq streets. The speaker was described as a horn type variety. The sound from the speaker could be heard fifty yards (45 metres) away. This attracted crowds who would listen on Friday and Saturday nights to boxing matches from the old Sydney Stadium or to popular serials.

Charles Tripp lived in Campbelltown for the remainder of his life. He died on the 17th of March 1953 and is buried in St John's Catholic Cemetery in Campbelltown.

Charles Tripp's early radio experiments are featured as part of Campbelltown Library's "Creative Campbelltown" display for the 2012 National Trust Heritage Festival. The display will be available for viewing at the H.J. Daley Library from April 14 to 29. 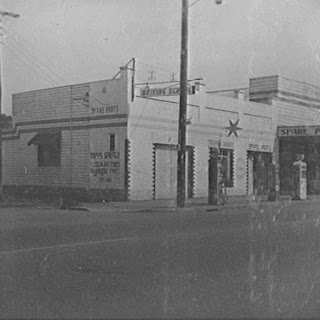 Do you remember Tripp's garage? Let us know your memories.