Tragedy of the Terry Sisters

Campbelltown has experienced many tragedies over the years but the drowning of the Terry sisters in 1900 was one of the most shocking and heart breaking for the community. Lillian aged 15 and Irene aged 12 both drowned in the Georges River in March, 1900.

The Campbelltown Herald reported that the two St Patrick's Convent pupils had a half day holiday due to the Campbelltown Show. Two of the nuns from the school and a Miss Cecily Hill took their classes for a walk to the river. The two Terry sisters went for a swim in the shallow area but wandered into deep water and got into difficulties.

At the inquest, Sister Cecily stated six girls went in to bathe. She succeeded in rescuing two girls and tried to save Lillian and Irene Terry. She told the inquest "I grasped Lily by the hair. But, getting in to deeper water myself, I lost hold." The police searched the river and recovered the bodies two hours later.

The girls came from the New South Wales town of Hay and their bodies were returned there by mail train for burial. A large number of sympathising friends followed the hearse to the station and the children of the convent joined in the procession.

The photograph below shows their headstone in the Roman Catholic section of the Hay Cemetery. It was reported as the largest funeral Hay had seen. 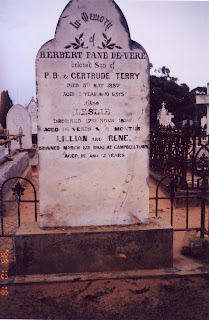