The Shop Famous for its Snake!

Bursill's Produce Store was an institution in Campbelltown for many years. It supplied the local farmers with all their feed requirements. The building stood on the southern side of a shop run by Bussell Brothers on the corner of Queen and Lithgow Streets. The shop's most infamous occupant was a carpet snake that terrified and fascinated the locals. The snake was used to keep the rodent population down and so protect the produce. Long time former resident of Campbelltown Lily Hepher, now in her late nineties, remembered as a young woman looking at the reptile through the top floor window of the store. It was always a source of fascination for her and other passers by. Another local David Milliken when interviewed remembered that when moving a bag of feed in the shop one day he was startled to find the snake right in front of his eyes. The shopkeeper assured him with an "its alright mate it won't hurt you".

The colourful Dr Ivor Thomas of Campbelltown in the 1940s was one night returning from a call in the early hours of the morning when he saw an obstruction over the trellis in the driveway. The storeman at Bursill's had his sleep interrupted that morning by a phone call from the doctor. "Come down and pick up your bloody snake" was the call. When the man arrived he found Dr Thomas busy photographing the snake which habitually escaped from Bursill's Produce Store and roamed the town at night. So much for Occupational Health and Safety!

Update: Susan Chandler, daughter of local identity Bon Wrightson, also discussed Bursill's snake in an interview she gave the library in August 2011. She said one day as a child she found it in the strawberry patch at her home in Dumaresq Street. She yelled at her grandpa that she found a big lizard. A worker from Bursill's who also lived next door retrieved the snake, knocked it out, wound it around his arm and took it back to Bursill's store! Susan also explained that after it had escaped so many times Dr Thomas lost patience and had it killed. 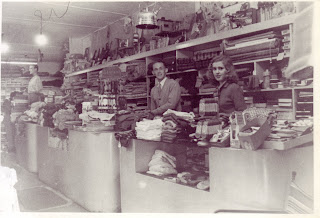 This shot was taken from the interior of Bursill's shop in 1950. (Col Clissold Collection)

Do you have memories of or have heard stories about the snake? Please share them with us.
Posted by Andrew Allen at 11:07