Politics in the Blood

I recently received a visit from former Campbelltown Council Alderman Frank Ward who now lives on the North Coast. He explained to me that he recently discovered the remarkable coincidence that his ancestor Charles Bull served as the second mayor of Campbelltown in 1883. He commented that had he known at the time he may well have got the few hundred extra votes he needed to win the State seat of Campbelltown in 1968. Frank served on Campbelltown Council from 1960 to 1969. He was proud to initiate the Council policy which required the electricity supplier to place its network underground. Campbelltown is today relatively free of unsightly and intrusive electricity poles.

Frank's great grandfather Charles Bull served as mayor from 1883 to 1884. Although gifted with using words and a smooth operator, he had an abrasive personality which quickly made enemies.He was replaced as mayor after one year by the more charismatic Alex Munro. Charles went on to later become mayor of Hurstville from 1891 to 1893 and later represented the seat of Camden in State Parliament. He died of blood poisoning after a bout of carbuncles in 1906, aged 60 years and is buried in Woronora Cemetery. 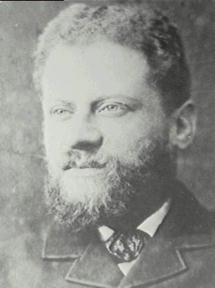 First Citizen: Mayors of Campbelltown Since 1982 by Jeff McGill
Campbelltown and Airds Historical Society 1996
Posted by Andrew Allen at 17:01