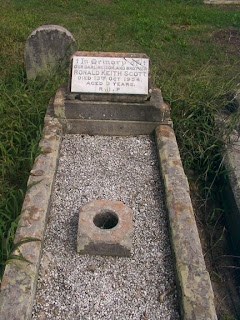 With magpie season drawing to an end I thought it was timely to draw your attention to a sad accident that occurred in October,1954. A 3 year old boy by the name of Ronald Scott was swooped by a magpie in a paddock near his home in Kentlyn. Ronald and his mother were picking peas when the magpie attacked. The boy was so terrified by the attack that a pea pod he was chewing became stuck in his throat. He was rushed to the local doctor but was dead on arrival from asphyxiation. The pea was later found in Ronald's throat by the local doctor.

Ronald Scott's grave in St John's Catholic Cemetery in Campbelltown can be seen in the above photograph.
Posted by Andrew Allen at 12:34