A Day at the Football 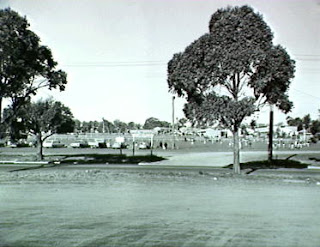 This photograph was taken in the 1960s and is of Duguid Memorial Park. The park was used mainly for rugby league and was at the northern end of Queen Street where Sams Warehouse and Officeworks now stand. It was named after Alfred Duguid, a local shoemaker, who was referee and treasurer of the Campbelltown Kangaroos football club for nearly 30 years from 1913. The ground hosted many enthralling games over the years. At one memorable game in the mid-1930s, a supporter fired a revolver into the air to stop brawling spectators!

Do you have memories of watching football at this park?

References:
Campbelltown: The Bicentennial History by Carol Liston (1988)
Posted by Andrew Allen at 13:40