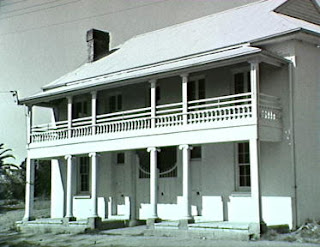 The Coaching House is one of the magnificent Queen Street terraces that are so synonymous with Campbelltown. The building was built around 1858-1860. Did you know that it was almost certainly not a coaching house though? Confusion arose over the fact that one of the original owners was named Cobb. There is no suggestion that Cobb and Co ever ran coaches along this route. The building was at one stage however a house of ill repute!