How we planned our Coronation Celebrations

It was almost 70 years ago that Queen Elizabeth II was coronated at Westminster Abbey. I thought I would see what Campbelltown had planned through the Campbelltown Ingleburn News on the date of the coronation 2 June 1953. I will post again tomorrow on how it all went.

Miss Campbelltown Tops the Poll- Splendid Voting in Queen Competition was the title on the front page of the local paper on the day of the coronation. Suitable female candidates were chosen from various local committees to raise funds for the Coronation Celebrations at the Campbelltown Showground. The funds would go towards refreshments and entertainment. A program of events for the day was drawn up that included a procession of floats from Fisher's Ghost Bridge; an address by the Mayor at the Showground; dedication service; investiture of the winner of the Queen Competition; dancing by Mrs Lowe's pupils; sports and Rovers' Programme and Barbecue.

The newspaper featured an article about Minto's candidate for the Queen Competition Noreen Hunter. She was the centre of attention and mixed with the "gay competitors" at a dance held at Minto School of Arts the Friday before the coronation. The gala dance was attended by a "sprinkling of men in uniform". Noreen looked striking in a dress of broderie Anglaise.

Apart from the Queen Competition and the program of events for the day, other stories in the issue were the usual mundane regulars. Closure of a slaughter house at Campbelltown was prominent, as was news on the development of a site on Pembroke Road for a new Leumeah school. A coroner's inquest into the death of Reginald Rix on Sydney Road was another article of interest. Otherwise, the usual wedding reports, including the wedding of Theresa Foreman to Gordon Clegg, along with sports reports and classifieds dominated the rest of the paper.

I will post again tomorrow with how the day went. 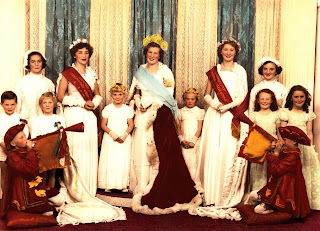