The research for this blog post comes mostly from Carmel Peek, descendant of Francis Lawless. Carmel wrote for the Gunning History blog, the website of which my post has taken extracts from. 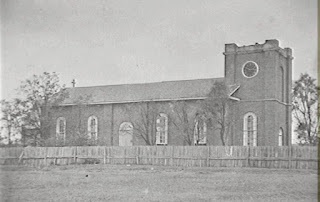 St Peter's Anglican church has stood proudly in the centre of Campbelltown's CBD for almost 200 years. Planning has already begun for its bicentenary next year. Built in 1823, it is the oldest building in the CBD and believed to be the third oldest church in the country. The church holds a special place in the hearts of the Campbelltown population. But who built and designed this wonderful old building and what is their story? Thanks to meticulous research by a descendant, we can provide a clear answer to both questions.

Francis Lawless was baptised on 6 March 1786 in County Meath, Ireland. In 1807 at the age of 23, he was sentenced to life imprisonment in Dublin for highway robbery. In March 1809 he was transported to the Colony to serve out the rest of his life sentence. Francis was described as being a bricklayer "Height 5ft 10 and a half inches, Hair Brown, Complexion Fair/Ruddy, Eyes Grey".

Francis' skill as a bricklayer was probably about to save his life, not long after he arrived in the Colony. In 1810, he was charged with forging and uttering a paper purporting to be a Paymaster note for the sum of two pounds. Francis along with another man named Dalton pleaded not guilty. Dalton was freed but Francis was committed to stand trial. He was found guilty and sentenced to be hanged. Fortunately for Francis, his sentence was commuted and he was sent to Newcastle "to replace Edward Young in the lime burners". It was likely his bricklaying skills and the use that would bring to the settlement that saw him reprieved.

In 1816, Francis married Catherine Kearns at St Phillip's Church of England in Sydney. They lived at 10 Pitt Street, formerly known as Pitts Row. The happiness gained from the marriage was continued a few years later when Francis was granted Conditional Pardon in 1819. This, along with secure employment as an overseer for the Government, meant Francis Lawless was probably in a good space at this time in his life. Further happiness arrived in the form of an Absolute Pardon in 1821.

The building and designing of St Peter's Church at Campbelltown was one of a number of constructions Francis worked on whilst living in Sydney. Other buildings included the convict barracks at Parramatta and the Benevolent Society for Sydney. Building work commenced in 1821 and was completed in 1823. The design and solid construction of the church demonstrates the competency of Francis.

Francis (better known as Frank) and Catherine eventually moved from Pitt Street after Frank received a land grant in 1826. The grant was in the Gunning district and the locality of their property was named Lade Vale. Frank lived until 1874 at his son John's property at "Erindale".