Campbelltown awoke to the sound of bells chiming from St Peter's Church on the morning of the Queen's coronation. They started at 8am and continued until 11am, echoing around the town and for miles away. An amplifying system was intricately set up in the bell tower the night before.

Campbelltown has always loved a street parade and this day was no exception. A procession made its way up Queen Street to the showground, where an impressive Dedication Service was held, followed by a full sports program for children. The newspaper reported that Queen Street was "a flutter with bunting, flags were flying and the Town Hall facade a brilliant fairy land of lights. However, the window dressing of shops left a lot to be desired according to the newspaper reporter!

At 10.30am the procession started from Fisher's Ghost Creek, linking up with school children at Dumaresq Street and the army at Allman Street. Following the army detachment came the Mayor and Mayoress and the Town Clerk and then the floats. The candidates in the Queen competition followed, and then a decorated ambulance and a Leumeah float with the title "The Greatest Show on Earth". All up the procession was about three quarters of a mile in length and the marching was in time! Crowd estimates for those watching were estimated at an impressive three thousand.

Mayor Farnsworth gave a speech at the Dedication Service at the showground. Miss Joyce Channell was announced the Queen competition winner and children's sports followed. Coronation certificates were presented to the children as a memento of the day.

The day's celebrations showed how much the monarchy still played an important part in people's lives. Almost 70 years later after the Queen's passing we have paid our respects to this amazing woman and her long rein. 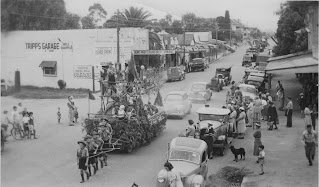