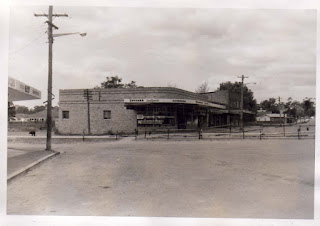 This is Percival's Butcher Shop in Oxford Road, Ingleburn. It was operated by former Campbelltown Mayor Greg Percival, following in the footsteps of his father and grandfather. The shop has been demolished but it served Ingleburn residents for many years and earned the reputation as a fine butchery.

Butchery had its origins in the Percival family from the late nineteenth century. In an interview with me in 2010, a year before he passed away, Greg Percival explained how his grandfather got started in the business. "So my great grandfather had two sons, one of whom was my grandfather. As a young man he got indentured as an apprentice to an uncle of his by the name of Caldwell in Campbelltown as a butcher." William Caldwell was one of the most brilliant mayors Campbelltown has had and turned to butchery after farming at Minto and Kenny Hill. Greg continued, "So he learnt butchery. He came to Ingleburn somewhere around 1893 from what I can deduce and he started a butcher's shop in Ingleburn. It was the centre of Ingleburn then, it was up to the east in Chester Road between Gertrude and Cumberland Roads towards the RSL. How long he was there, I am not sure maybe a year or two I don't know."

At age 21 and frustrated doing office work, Greg realised that his father needed help in his butchery business as he was getting older. Ingleburn was growing and their was the potential for the business to grow, although his father could not see that. Greg resigned from the Public Service and joined his father. He would start work at 3am and get home at 7pm. The work was hard. In the days before refrigeration Percival's Butcher Shop had a big cold ice room for the carcasses. Greg then joined Council and combined this with his work in the business. Greg then borrowed money and built a new shop in Oxford Road pictured above. The site was later occupied by the Westpac Bank.