The Macarthur region experienced severe flooding this week and we are all looking forward to overdue sunshine. Floods are nothing new to Campbelltown. One of the worst was in 1961. Newspaper coverage was extensive and fortunately a number of photographs were taken to capture the extent of the inundation.

Locals Share The "Big Wet" was the headline from the Campbelltown-Ingleburn News that week, indicating that nowhere in the area escaped. The deluge started on the Saturday afternoon of November 18 and continued relentlessly through to the Sunday morning. The paper reported that "Residents awoke at dawn on Sunday morning to look out upon a sea of water". Traffic was driven to chaos as most of the roads around Campbelltown were closed. Residents in the low lying areas prepared to leave as the flood waters rose. The peak of the flood at Campbelltown was at 7.30am on that Sunday morning and downstream at Glenfield at 9am. Even Queen Street was under water and not trafficable until about 8am.

The severest flooding of homes in the municipality occurred at Macquarie Fields where Bunbury Curran Creek flooded adjacent areas. Police and rescuers there used rowing boats to visit the affected homes to ensure the occupants had left. This proved difficult however with the strong current.

The rain cleared up a little after Sunday and through to Monday. Then on the Tuesday morning just before 9am, a flash storm resulted in 160 points (40 millimetres) of rain in 20 minutes, and within 30 minutes caused flooding worse than on Sunday morning. The drainage from Sewer Lane (today's Dumaresq Street) blocked from excessive floodwater. Some of the places affected were Tripp's Garage and the Balalaika Cafe Library!

One of the areas heavily affected was Minto. Residents who has lived most or all of their life there thought it was the worst flooding in memory. The floor of the studio of well known sculptor Tom Bass was flooded and some models were affected.

The following photographs were taken at Minto from the Number 2 Railway Cottage. 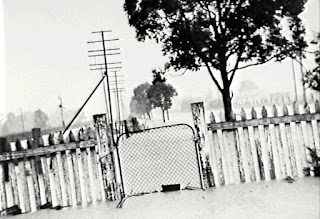 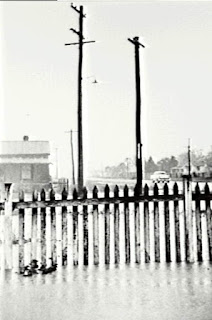 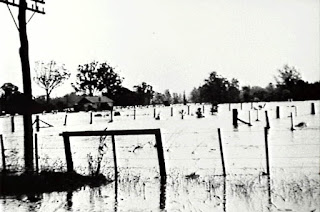