Last Saturday I gave a presentation to the Campbelltown and Airds Historical Society on a Campbelltown identity from the past named Zillah Dredge. One of the schools Zillah attended was Miss Clark's private school in Cordeaux Street. The Historical Society have since drawn my attention to a few images of this school, including this wonderful photograph of the school below and its children in 1910. A young Zillah Cooper, as she was known then, is standing at the back aged about 12 or 13. 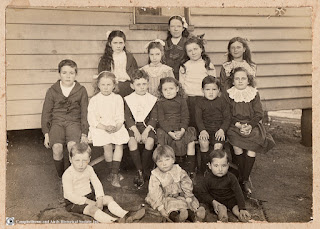 At back standing: Zillah Cooper

Little is known about the school. It was believed to have been built in the 1880s and was located at the back of a house at 5 Cordeaux Street. The house was known as "Rema". According to Zillah the school was a very big room at the back and attached to the house. She described it as like a big dormitory and a big room. Miss Clark ran the school and lived in the house with the owner, her sister Hannah Tallentire. Miss Clark was the daughter of Samuel Clark and Isabella Kearns. She taught about 30-40 students on her own. Zillah believed Miss Clark taught at the school for ten years. The house and the school were demolished about 1975 or 1976.

Despite a comprehensive search of resources, I am unable to find a first name for Miss Clark. If anyone has more information on the school, Miss Clark (including her first name) or photographs, I would be very interested. 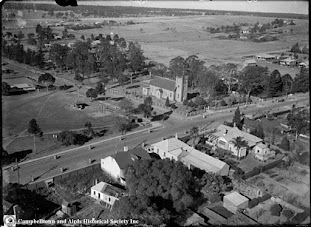 The school is in the centre of the photo, attached to the white house in the middle (Campbelltown and Airds Historical Society)