Every town has its characters. Those people that are remembered fondly and talked about long after they are gone. Menangle was no different. Black Nellie, Granny Farrell and Billy Baldaxe were three personalities much loved from Menangle's early days and I thought I would tell their story. Their stories mostly come from J.J. Moloney and his book "Early Menangle".
Na Daang, also called Black Nellie, was born in the Penrith area and spent most of her life there. She was remembered as being generous, kind to animals and fond of young children. She made periodical visits to Menangle, accompanied by several dogs of various breeds. Her connection to Menangle originated from a visit she made to Camden Park in the 1830s. She met Johnny Budbury, an aboriginal constable and tracker, who had been born and raised in Camden. It was a case of love at first sight. They later moved to Windsor and Johnny at some stage passed away. When Nellie in later years returned to Menangle she stated that Johnny was dead, but that he was a good man and prayed to God before he died. She was very popular in the area and treated well by the locals.
In the years after Johnny's death, Nellie befriended a white woman by the name of Sarah Shand. She lived on her family's farm on Bringelly Road from 1891. Shand wrote about Nellie's life and painted a portrait of her. She was photographed a number of times, including by Sarah Shand. In one photograph her eccentricity is revealed by showing how she wore her usual two dresses. She would often wear as many as seven petticoats at once.
Black Nellie lived until the 1890s. There is some conjecture about where, when and how she died. There is a possibility that she sadly died at Newington Asylum on 10 December 1898. NSW Birth, Death and Marriage records indicate an aboriginal woman by the name of Nellie died there. I hope it is not her and that she moved away somewhere and experienced a peaceful end to her life. 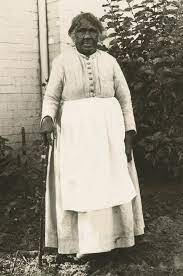 Black Nellie photographed at Penrith in the mid 1890s (Local Studies Collection, Penrith City Library)
Another character from the early days of Menangle was Mary Ann Farrell. "Granny" Farrell was held in very high esteem by the Menangle locals. In the mid-1870s aged in her mid nineties, Granny would frequently walk four of five miles (6.6 to 8.04 kilometres) every afternoon around Menangle. She always stood out in her snow-white hood of the period. She had been married twice, her second husband Christopher dying in 1853 aged 80. Granny Farrell lived by herself after Christopher's death in a house located approximately on the left hand side of Menangle Road, just past the turn off to Glenlee Road, heading towards Menangle. Incredibly, she was aged 105 years when she passed away on 28 February 1885! She is buried with her husband in St John's Cemetery in Campbelltown. 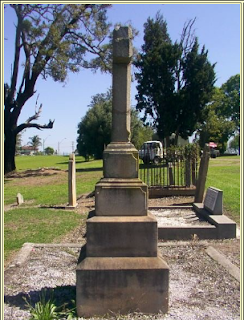 The Farrell grave in St John's Cemetery
The third Menangle character was known as Billy Baldaxe. His real name was probably Baldock. He possessed a fiery temper and a thin physique. Billy was a convict and according to J.J. Moloney, took pride in exhibiting the marks of his 1500 lashes. Moloney went on to describe him as "possibly the best relic of the system" that he could remember. After his emancipation, he was employed by the pioneering Woodhouse family. A search of convict and other records for this man proved inconclusive.
Sources:
MOLONEY, J.J. 1929
Early Menangle
Newcastle: The Australian Society of Patriots
Karskens, Grace
'Nahdoong's Song'
Camden Museum Facebook site, 10 September 2020.
Posted by Andrew Allen at 14:23