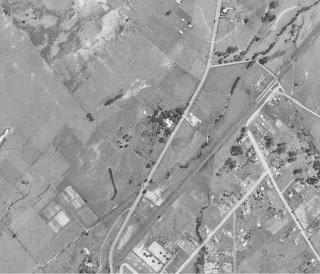 This aerial photograph from 1956 demonstrates how much Campbelltown has grown in 65 years. The area shown covers from Kialba Road at the bottom of the picture to Hollylea and the Plough Inn at the top of the image. At the very bottom at the left of the aerial shot is "Kialba" and its surrounding trees. "Kialba" was a large federation-style home located at 29 Kialba Road. The home was built and occupied by Alfred Payten, an architect from the well-known Payten family. It is now vacant land and its palm trees still exist.

In 1956 Kialba Road joined Campbelltown Road. This can be seen in the photograph where it bends to the right and connects with Campbelltown Road. A little further north and Campbelltown Road crosses Bow Bowing Creek. On the banks of the creek at this spot stood the iconic Keighran's Mill. Built in 1855, it was also referred to as Payten's Mill. In later years it had displayed on it's wall an advertisement for Wolfe's Schnapps. The mill was dismantled in 1962.

Heading further north along Campbelltown Road and on the left is the home "Woodbine". This fine old house could date as early as 1817 and was home to the Payten family from 1873. It was surrounded by magnificent trees such as kurrajongs, acacias, pines and cedars. "Woodbine" was demolished in the 1960s after the land was zoned industrial. What a shame! The site of the house is about where 7 Hollylea Road is today.

The right of the photo shows the growing suburb of Leumeah. The railway lines runs through the middle of the aerial photo between Leumeah and "Woodbine". In 1956 when this photograph was taken, Campbelltown Road was aligned differently. It followed the path of where today's Hollylea Road is located. The two-storey house "Hollylea" and adjacent Plough Inn can be seen on the old alignment of Campbelltown Road at the top of the photo. "Hollylea" was known as The Three Brothers Inn in the early days of the settlement and was owned by Nathaniel Boon.