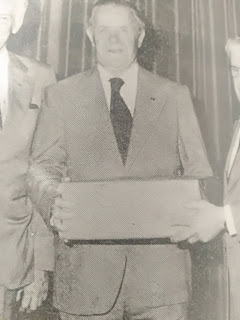 “He was a character, Slats. But he kept the town in order, one policeman. We had respect for him, I think that was it. We had respect. If we didn’t, we got a clip across the ears, or a boot up the backside.” These comments seem to reflect the town’s feelings toward a much-respected cop. A man who well and truly left his mark on Campbelltown.

Bernard Patrick Slattery, known affectionately as Bernie, joined the police force on 3 July 1939, at the age of 21. After initial training, he was posted to Sydney’s Clarence Street Police Station until 1945. Then transferred to Camden, he remained there for eleven years. At Camden he was promoted to Sergeant 3rd Class and then got sent to Grenfell for two years.

A rugby league match at Camden between fierce rivals Camden and Campbelltown threatened to erupt one year in the 1950s. Before the match, Bernard went to both dressing rooms and said we might just arrest someone today. There had never been an arrest at a football match in the area before. It ended up one of the cleanest football games anyone had seen.

In October 1960, Bernard transferred to the position of officer in charge of Campbelltown Police Station. Sergeant Slattery served 12 years in charge of the little station in Railway Street. He lived in the police sergeant’s residence down from the police station in the same street. In those days, the station was closed between midnight and 8am so the telephone had to be answered by the lock-up keeper.

Sergeant Slattery earned a reputation of being a fair and respected policemen. Young offenders, after receiving a stern lecture, then benefited from the Sergeant’s advice. He would say “I am not just a jailer waiting for you to put your foot wrong. I like to think I am here to protect life and property and that I can lead the community and encourage citizens to be law-abiding.” One story told by his son Michael concerned a certain Campbelltown youth who was in the habit of stealing bikes. Sergeant Slattery bought a second hand bike and lent it to the boy but asked him to look after it, including oiling it regularly. He wanted him to bring the bike in every second Saturday so he could inspect the boy’s work. After a while, he gave the bike to the lad permanently.

Bernard rose through the ranks from constable to sergeant, inspector and finally superintendent, where he oversaw a division incorporating Campbelltown, Fairfield and Liverpool. He was later sent to Broken Hill, Philip Street in the city and then Wollongong, before “returning home” as superintendent in charge of I division which covered Fairfield to Bargo. He considered the high spot of his career as the time when he was in charge of police arrangements in Sydney on the day that the Whitlam Government was sacked in 1975.