With the unfortunate demise of local newspapers, I thought it was timely to write about Campbelltown's first newspaper: the Campbelltown Herald. Further, the pending conservation treatment of the only print version of this newspaper's first issue was more motivation to write this post.

Local newspapers have kept residents of Campbelltown informed about local news since the first issue of the Campbelltown Herald published on 14 February 1880. Until then, very limited news was available on the area, apart from the occasional mention in the major Sydney press. When it was launched, the population of Campbelltown was estimated to be less than 700 people!

Consisting of four pages, it included news items such as horse stealing charges and news of the proposed Upper Nepean Water Supply. The newspaper has many classified advertisements at the front- typical of newspapers from that era. Some of the products advertised include Dr Burdett's Female Pills and Oriental Tonic. The founder and proprietor of the Campbelltown Herald was William Webb. He wrote his aims and intentions in that very first issue, under the heading "Prospectus". He said "It will be a weekly journal, representative in character, impartial in its views, temperate in tone and generous to all its foes. Sectarianism, personalities, slang and blackguardism, so prevalent in some quarters, will be eschewed by the Campbelltown Herald."

William Webb was born in 1848 at Penrith, and educated at Mudgee, where he served his apprenticeship in the local newspaper office. In total, he started about ten newspapers in many districts including Camden, Picton and Penrith. When he moved to Campbelltown from Kiama in 1879, he set his printing press up in a building owned by James Bocking. In 1884 Sir Henry Parkes unsuccessfully sued him for libel. The case was regularly featured in the press for many weeks in 1884. When he retired from the newspaper game, he embarked upon a saw milling business, then tried his hand at farming. He then went to Yerranderie where he had an interest in a silver mine. He was also at one time licensee of the Club Hotel. William Webb died of appendicitis at Camden in 1910 aged 64.

Last year the Macarthur Advertiser generously donated the original and only print issue of the Campbelltown Herald to Campbelltown City Library. The newspaper requires much conservation work to preserve it for future generations. A conservator will begin work on it in the coming weeks with the aim to have it displayed at HJ Daley Library on completion. 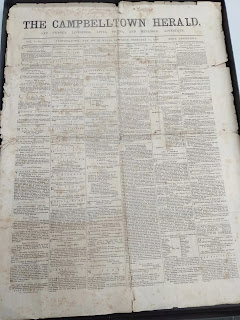