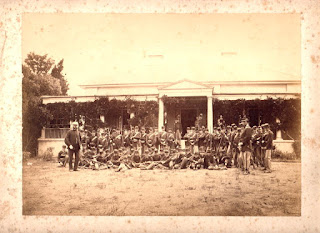 The oldest photograph is our local studies collection is this one above. It shows the Cadet Corps that was formed at St Mark's Collegiate School at Macquarie Fields House. The house was leased to George Fairfowl Macarthur for use as a boarding school for boys. He moved the St Mark's Collegiate School from Darling Point to Macquarie Fields House in 1858. The school became the most fashionable in the colony. The first school cadet corps in NSW was formed at the school in 1866. The school merged with the King's School in 1868 and moved to Parramatta. The photograph is taken around 1866 and is in sepia. It was purchased by the library in 2007.

Macquarie Field's House deteriorated badly during and after the Second World War. As early as 1951, the National Trust of Australia began moved to have the building restored. Most restoration work took place from 1958 to 1963. It stands proudly restored today close to the suburb of Macquarie Links. 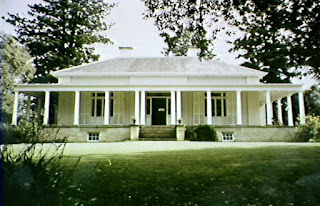