High Among the Trees 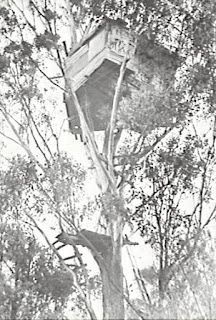 Considering it was built by young boys, this treehouse at Leumeah was considered an inspired work of construction. It was built 60 feet (18 metres) in the air and must have been a challenge to climb, if not a terrifying one for those boys not thrilled about heights. The treehouse was built on a public reserve near the Scout Hall at Leumeah by a group of local boys and it was even furnished. Unfortunately, in April 1969, Leumeah Progress Association received complaints about misbehaviour at the treehouse. These complaints weren't caused by the builders but by other people. The association complained to Campbelltown Council who inspected it and then gave an order for its demolition.

There are claims that this treehouse was built by either the Nash or Fetterplace family and that it stood on Narellan Road between Campbelltown and Narellan. The discovery of this newspaper article and accompanying photograph would prove this incorrect however.