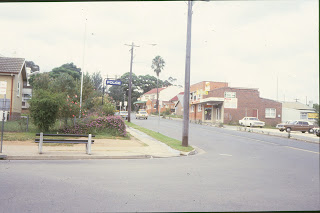 I have written about Railway Street in Campbelltown before and how it has transformed over the years. This photograph was taken in the 1980s. The view looks east and shows the police station and residence, as well as a group of shops, including a hairdresser and an electrical contractor. Lack's Hotel is on the corner and the Royal Hotel is just out of the picture on the right. Lack's Hotel was demolished in 1984, so it probably dates to the early 1980s. All of the buildings and plants in this scene have vanished. Only the plants in Mawson Park in the background and the court house (the chimney can just be made out in the background on the left) still exist. The new court building on the left and a car park on the right now dominate this same view.
Posted by Andrew Allen at 15:08