It's not often that a toilet block is honoured with a permanent conservation order. In February 1982 this rare event occurred when a disused four-seater lavatory at Denham Court was recognised for its heritage significance. The "four seater" model outhouse, hidden for decades by a bougainvillea, was believed to have been built in the early days of Queen Victoria's reign, when Denham Court homestead was converted to become the Miss Lester's Seminary for Ladies. The two-room timber construction is about six by three metres and each room has a bench with two holes suspended over a deep pit. It was believed to have been built between 20-30 years after the homestead and, as it seemed to big to belong to the house, must have been associated with the school. The design suggested it could have been a demountable structure to be moved to another location if the occasion arose. 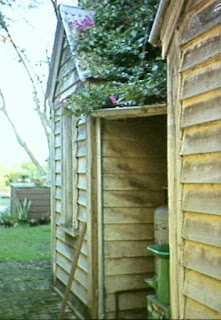 The four seater "dunny" at the Denham Court property pictured in 1994 (Photo by Alex Goodsell, Campbelltown and Airds Historical Society)

The Heritage Council originally planned to put the order on the entire Denham Court property but the owner protested saying that only the house and the lavatory justified preservation. It was decided that all the other outhouses were not of historical interest.