When the question of whether or not Campbelltown should get electric lighting back in 1921, the town was almost split down the middle. Campbelltown Council held a referendum to gauge support. There were 80 votes in favour and 65 against. Many people were a bit afraid of this "new-fangled business". Three years later however, electricity was turned on for the first time, lighting up the town like a Christmas tree.

The honour of flicking the switch fell to Mrs Hannaford- wife of Mayor Charles Hannaford. This occurred on the evening of 23 January 1924 at the power station in Cordeaux Street. An excited crowd of 1000 people gathered to look at the illumination of hotels and shops in Queen Street. A number of business houses that included The Club, Federal and Royal Hotels, Reeves Emporium and the Railway Station, were decorated with dazzling lights and flags.  The mayor's house, named Miramichi, situated next to the court house, was also decorated with rows of coloured lights.

The Electric Power Plant and Power Station was the first of this particular type in New South Wales to produce energy on the alternating current system and fed by crude oil. It was a source of loud noise and could be heard all over town when it was started. It therefore ran only at certain times of the day and night. 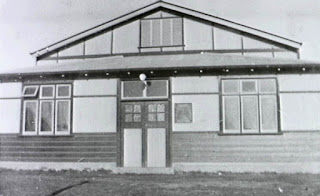 
The two diesel-powered generators installed in the power station had less than one hour's down-time in four years, but they soon became obsolete and in 1929 Campbelltown was connected to the Railways Department electricity supply system. The electricity station was located about where the front yard of the Catholic Presbytery is today. A cement slab remained for many years until the new presbytery was built on the site. It's likely that remains of concrete pylons to the immediate left of the presbytery's front door are connected to the electricity station. It was demolished in 1931.

Ingleburn eventually got electricity in 1930 and loans raised were able to extend it to Macquarie Fields, Glenfield and Denham Court in 1936.

LOW, R.A
Switched On In The West