The small cemetery at the St Mary The Virgin Anglican Church at Denham Court, regularly referred to as God's Little Acre, dates back to the 1830s. The first interments were Richard and Christiana Brooks and were made several years before the graveyard existed. The chapel was erected over their graves in a vault under the sanctuary. Determining what burials occurred soon after becomes complicated as some burials were recorded by other parishes. The records of St Luke's at Liverpool show that a William Roberts was buried there in 1837. This appears to be the burial that follows the Brooks burials. Another early burial from the St Luke's Register is that of baby William Hush aged 7 weeks and buried in 1838. The first burial at St Mary's recorded in the Church's own burial register was that of a free settler, Mary Goodall. She was aged 75 and buried on 2nd April, 1845. She was buried only a couple of days after the cemetery was consecrated by Bishop Broughton on his way home from the Maneroo. 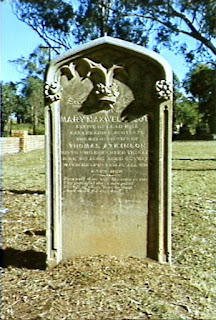 
The original burial register contains 258 registrations, however research indicates that this is well short of the actual burials in the cemetery. This was probably because there were a large number of burials carried out when the cemetery didn't have a permanent clergyman. Some of the missing names may have been recorded in another parish.

Some years ago I was approached by the family of a well known Ingleburn identity named "Digger" Black. He passed away in the 1950s and was buried in the cemetery, but the location of his grave has been lost. Although a reasonably recent burial, the site of "Digger's" grave was not recorded, leading to much frustration and heartbreak for his family.

Another mystery is that of a child's grave surrounded by an iron fence with the initials "W.C.F." inscribed on a small headstone. Mysteriously, the cemetery or church records have no details of a person matching those initials. There is a person who once regularly put flowers on this grave and it is not known if they did it through kindness or if they knew the person.

During the 1930s a young girl and a State ward died and was bound for a pauper's grave. She was saved from this fate by a generous and caring family named Gavin who allowed her to be interred in a section of their family plot.

As well as local pioneers, the cemetery contains the remains of notable people such as "Gentleman" Jack Crawford, one of Australia's greatest tennis players. He is buried with his wife, the former Marjorie Cox, who also played tennis at a high level.

A visit to this little place of serenity is highly recommended. There are many various monument types and styles, with each telling a story in some way of that person's life. 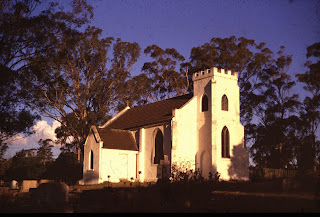 St Mary the Virgin Church with some of the headstones from the cemetery in the foreground (Trevor Richardson Collection).