Perched high on the hill with a commanding view of the town is a masterpiece of nineteenth century architecture named St Elmo. What a colourful history it's had. Often the centre of Campbelltown's social life in days gone by, St Elmo survived demolition to become one of the town's most important historical buildings.

The two-story rendered brick house appears to have been constructed from the late 1880s and completed in 1892, although every source I find muddies the waters about when the first work was carried out. It was built for John Moore, a wealthy real estate investor from England. Apparently the builder was courting John's daughter but went broke and in the Depression and left for Melbourne. The origins of the name St Elmo are unclear. There is a theory that it relates to John Moore's nautical background and is connected to either St Erasmus, the patron saint of Mariners of which St Elmo is an abbreviation for or to 'St Elmo's fire' and the electrical discharge emitted from ships after storms. 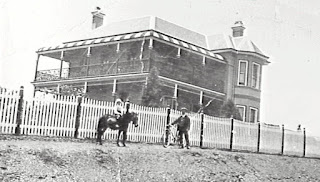 
The building was sold and by 1916 the Allen family were living there. The family were lavish entertainers and huge parties were regular occurrences at St Elmo. Frances Allen was renowned as a splendid hostess at the famous parties. One of the daughters, Addie, played the piano which stood in the drawing room. She was also an accomplished organist, playing at St Peter's Church. 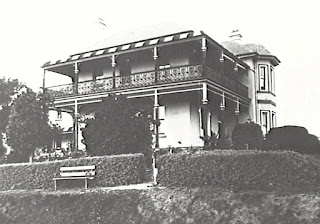 
The original kerosene chandeliers were replaced (not long after the Allens moved in) by Quirk's Air Gas Lighting Equipment, which lit the exterior as well. This impressed the residents of the town, because beautiful St Elmo could be seen by night as well as day, from all over the district. Modern lighting was eventually installed after 1924 when electricity came to the town.

Now let me get to the ghost stories. The first occurred a long time ago. A statue once stood in front of the house. One evening a man (well "lubricated") startled the household by claiming he had seen a ghost. The family assumed it was the statue in the front garden which has caused the commotion!

In the 1920s a maid said she often heard footsteps but was unable to find who was walking. She also said doors opened without explanation. In the 1950s a child became upset after seeing a bearded ghost.

In 1985 Campbelltown alderman and campaigner John Hennessey walked around the back of his flat at St Elmo at 2am on New Years morning. He saw a young woman sitting on the old well, apparently waiting for him. The pretty 18-year-old was wearing a long white dress. John was almost within touching distance of her when she vanished into thin air. "I didn't think anything of it. I thought I was seeing things, or that someone was playing a joke on me," he said. He laughed it off thinking someone was pulling his leg. However, he had a "strange feeling" that someone was around the house. After about 30 minutes he went into the bathroom and looked out at the well. He saw the young woman standing beneath a tree about 10 metres away. She was looking at John and had a serene expression on her face. She then vanished after he turned on the outside light. "I didn't get a shock at all, just a funny feeling." 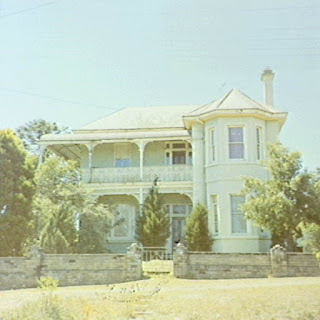 John Hennessey was also responsible for a preservation order being placed on the building. There had been a suggestion that the building would be demolished to allow for widening of Broughton Street. A building conservation report was written to support further the conservation of St Elmo for future generations to enjoy.

I thought I would include a few more short interesting facts and stories about St Elmo: