Apex Park: Past and Future

An exciting new Billabong Parklands Project is coming to Campbelltown. The $18.75 million water recreation space will be delivered under the Western Sydney City Deal Liveability fund and located in the city centre in Apex Park, Bradbury. The next phase of design is underway and ideas are welcome from the public. The project is forecast for completion in June 2022. A fascinating and exciting future awaits! But what about Apex Park's past?

The park, first known as Fisher's Ghost Park, was opened on June 19, 1971. It was constructed by the Apex Club of Campbelltown and officially opened by Mayor Clive Tregear. A sum of $2800 was set aside by the club for the park. The "futuristic play area" as the newspaper described it, featured a vintage car, fort and a fire engine. It also featured seven bronze plaques which all tell the story of Fisher's Ghost. They can still be found in the park. A fireworks display and pony and train rides for the children marked the occasion. 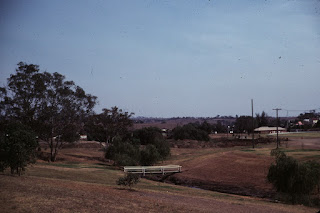 Despite being taken in 1979, this view hasn't changed too much. The bridge is still there but with a path leading to it. The vegetation around the creek has obviously grown also. (Trevor Richardson Collection).

On June 3, 1989 the new Skateboard Bowl was opened by Mayor Jim Kremmer in Apex Park. Sometimes referred to as the Mexican Hat Rink or Sombrero, the skateboard bowl provided hours of entertainment for the youth of the town. 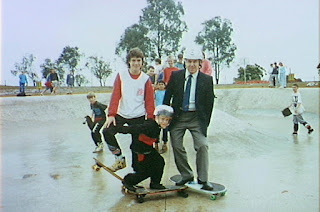 By 1997 Apex Park was looking run down and shabby. That's when members of the original Apex Club got together for a huge clean up. Led by former president Gerry Bakkers, the retired members rejuvenated the park to its former glory days.