The Much Loved Mr Newman

One of Campbelltown's most loved and respected teachers was Patrick Newman. Born in Ireland in 1832 to parents Joseph and Alice, young Patrick arrived in Australia in 1852 on the Herald of the Morning.

Patrick's first connection with Campbelltown came twelve years later in 1864 when he took charge of the Catholic School on Old Menangle Road. This building is known today as Quandong. The very popular teacher attracted students to the school and by 1880 enrolments had reached 140. Then in August 1880, amidst much controversy, the popular headmaster was transferred to Campbelltown Public School. Prominent Campbelltown citizen and politician John Kidd was largely behind the move. Enrolments for the Public School were falling and Kidd was aware of Patrick's reputation. Many Protestant children transferred from the Catholic School to the Public after Patrick's transfer, such was the high esteem that he was held in. The Catholics of Campbelltown were furious at what they saw was a deliberate attack on their school. Despite the protests, the Minister of Education refused to take any action.

The relationship between John Kidd and Patrick Newman became closer on his appointment. This relationship got Patrick into trouble on one occasion however. In 1880, not long after his transfer, Patrick drove Kidd to a political meeting at Narellan because Kidd's horse was lame. As attitudes to public and private morality were demonstrated most clearly in reactions to local schoolteachers, Newman was accused of political bias. Teachers were not allowed to express political opinions. The incident, in reality, didn't seem to affect Patrick's popularity with most of the community.

There are a couple of memories of past pupils of Campbelltown Public that provide an insight into Patrick Newman's term at the school. Cricket was a favourite game played by the boys. Mr Newman would not allow them to drive stumps into the ground, but he did allow them to use a stump of a box tree, after they had chopped the tree down, sawn it into logs and stacked it in his backyard. Can you imagine this happening today! One lesson, which Mr Newman insisted upon, was the identification of various snakes, especially venomous ones, and also the treatment of snake bite. He believed it was necessary because of the bush surrounding Campbelltown and a number of boys went shooting at weekends. He advised them, when going into the bush, to always carry in their pocket a length of string, a knife and a sixpence. In case of snake bite, the string was to be used as a ligature and the knife to scarify the wound. If they became lost and came out near a farmhouse, the sixpence was to be used for a meal and possibly transport home.

He had a reputation of being strict and used his cane frequently. Despite this, he was also considerate, especially to children who often became sleepy during lessons because they had to rise early, milk cows and then walk long distances to school.

By the late 1890s Patrick's formerly neat handwriting had become shaky. He was now in his 70s and had been the leading educational figure in the town for 37 years. Mr Newman eventually retired with six month's long service leave in 1901 to his home known as 'Tara" on the leafy hilltop overlooking the school and town he had grown to love. This house still exists on the corner of George and Condamine Streets.

Patrick Newman passed away on October 19, 1909. He was buried in St John's Catholic Cemetery. He died a year after his wife Elizabeth. Patrick took a great interest in the volunteer force and two of his sons served during the Boer War.

The only photograph I could locate of Patrick is this grainy image below. Taken around 1890, it shows Patrick and Elizabeth on a horse drawn buggy somewhere in the local area. 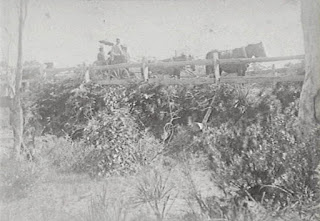