It would have been a typically hot and steamy February morning in Campbelltown. By midday on Sunday, February 11 1883, the skies over the small village has darkened and, in a matter of moments, so too were the lives of the Denmead family.

The Denmead family, including parents James and Eliza and their children, had moved to Campbelltown by 1857. It was during the 1870s and 1880s that the family lived at Emily Cottage. James Denmead was a butcher in town and possibly had his shop adjoining the cottage. Two of his daughters living there in 1883 were Emily and her sister Mary.

This is how the Evening News of 16 February 1883 and a number of other newspapers around the country reported what happened that fateful day:

At about midday on Sunday last, while a Miss Denmead was standing at her bedroom window at Campbelltown, a flash of lightning struck the bed in the room, burning part of the curtains and killing Miss Denmead on the spot. An inquest was held on Monday last, when the jury found that the deceased had been struck dead by lightning.

It was poor Mary that was struck. She was only 21, not married and a whole life ahead of her. There have been many stories over the years that claimed it was Emily that was struck, however this is untrue. Similarly, many have believed that Emily Cottage was named after Emily Denmead, but this cannot be proven. There is another story that a retired sea captain lived at the cottage in 1865 and that he named the cottage after his brig Emily. 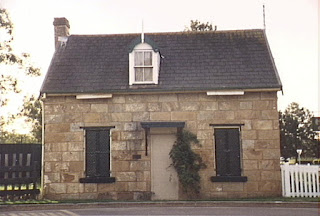 Emily Denmead would later marry Ted Wearne in 1891. This was a controversial marriage, as Ted was from a staunchly Protestant family and Emily was Catholic. She died in Stathfield in 1944 aged 73.

Mary Denmead was buried in St John's Catholic Cemetery on the hill, along with other members of the Denmead family. (see below) 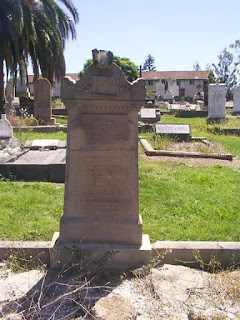 Next time you are passing Emily Cottage, that much loved icon of Campbelltown at the intersection of Camden and Old Menangle Roads, spare a thought and perhaps reflect back on that terrible day for Campbelltown and the Denmeads.