A well-known landmark as you approach Campbelltown from the freeway is Hollylea House. This two-storey sandstock brick house was built by Nathaniel Boon next to the Plough Inn on Campbelltown Road about 1829, although this date in uncertain. With the realignment of Campbelltown Road, the old inn is now in Hollylea Road. 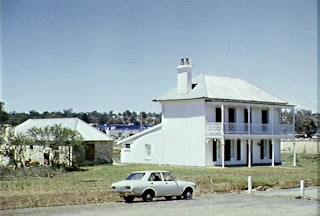 This photo of Hollylea House was taken in 1980
The building hasn't always been known as Hollylea House. In 1830 Nathaniel and his wife Sarah were proud parents of boy triplets, Nicholas, James and Jonathan. Someone having triplets today is quite newsworthy, so one can imagine how this caused huge excitement in the area in 1830. Capitalising on this considerable publicity and excitement, Boon licensed his inn under the sign of The Three Brothers in 1832.

Drama and controversy seemed to follow Nathaniel Boon all his life. Some of the dramas included: 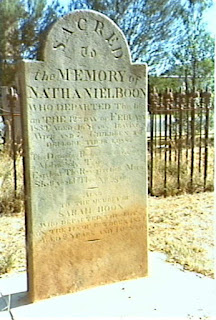 The Three Brothers Inn became known as The Traveller's Home in 1854, after it was licensed by William Ray. The inn closed its doors in 1858 after the railway line between Campbelltown and Liverpool was opened. It became a private residence known as Borobine House. It was renamed Holly Lea by parliamentarian John Davies after he purchased it in 1884. Today it is spelt as Hollylea.