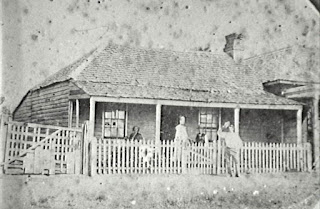 A few weeks ago I posted about the very difficult task of identifying more (actually anything) about the above photograph. I knew my chances of finding anything were remote. However, after some intense detective work, I think I'm on to something!

Very few details about this photograph in our collection existed. There was no date, location or names of the people. All we have is that it was taken in Campbelltown. We do however, have the name of the photographer. The image was taken by Boag and Milligan, Sydney. Research by the State Library of Queensland reveals that these two operated a photography business. The early part of William Boag's career was spent in Sydney where he was in partnership with portrait photographer Joseph Charles Milligan. Boag then went to Queensland in November 1871.

The library was fortunate enough to have two other images of Campbelltown in its collection by William Boag. Both these images were taken in 1871. It can be fairly certain then that this particular photograph therefore dates to 1871. Both the other photographs are of buildings located at the southern end of Queen Street: Mrs Hickey's shop and Bugden's blacksmith shop. In fact both buildings, from the records we hold at the library, appear to have been located virtually side-by-side to each other.

I decided I would search all the 1156 images we held of Queen Street for a building at the southern end of the street that looked like the one above. After trawling through hundreds, there was one that caught my attention. It was taken in the 1950s. It shows what appears to be a very old house and to the left of it, another house. A closer inspection of it however, reveals that it is two houses very close to each other. At first glance the building or buildings don't appear to resemble our building. However, if you imagine looking at them from a different angle, you get a different picture. 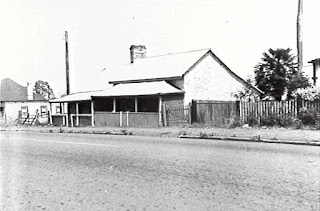 If you examine the 1871 house, you will notice a building adjoining it that has a verandah  and roofline elevated from its verandah. The house, like the one in the 1950s photograph, is very close and almost attached to it. Other similarities include the chimneys and the verandah posts. There is also a similar gap where gates can be found at the side of both houses. About 80 years separates both photographs, so changes will obviously have occurred in that time.

It's a shame we don't get a decent shot of the 1950s house from the other angle, as this would probably show where the windows are located and therefore prove one way or another if it is our house.

If we can be sure this is the same house we are looking at, maybe we can then go close to identifying the people in it. Norm Campbell, who is now in his mid 90s, remembers the houses that were taken in the 1950s. He said that Mears family lived in the smaller one on the left (same house as the 1871 one) and the Reynolds family in the larger house on the right.

Norm also confirmed that Bugden's also lived in the house to the left of the other houses in the 1950s photograph. This is of course a much later house and would've replaced Bugden's old blacksmith shop. Mrs Hickey's shop was located 50 metres to the south of the Queen Street and Bradbury Avenue intersection. I measured this and it is exactly where you drive in to the car wash today. Therefore I believe it would've been in the same vicinity as the above buildings, possibly even between Bugden's and the 1871 house. Norm also said that the post in the extreme right of the 1950s image was part of Dredge's cottage.

So, I believe I could possibly have solved this. I can't be certain of course. However, it would make sense that Boag took the three buildings next to each other on that day in 1871.

I welcome your thoughts on this.
Posted by Andrew Allen at 09:35