In the Campbelltown Ingleburn News of April 30th, 1968, it was reported that Frederick Harmon of Campbelltown would drive the inaugural electric train to Campbelltown on May 4th. It was also reported that he was a grandson of William Harmon, a crew member of the first train to run to Campbelltown in 1858. Whilst this is a great story, some research revealed it was not entirely true!
William Henry Harmon was born in 1853. He married wife Jessie Maria Lovett in Sydney in 1878 before settling in Liverpool. They had a large family of seven children. William joined the Railway Department and became a locomotive engine driver. He retired in 1913, and died in 1933 at the age of 80. It would seem that Mr Harmon would have been far too young to drive or crew the first train to Campbelltown, and indeed it was reported in the SMH that the Chief Engineer, Mr Whitton, drove the train in 1858.


Percy Harmon was born to William and Jessie Harmon in 1887. He played football as a youngster. Percy volunteered for the Navy at the age of eighteen for five years. After his stint in the Navy, Percy joined the Railways Department as a cleaner, but when war broke out, he resigned and rejoined the Navy from 3rd July 1915 til March 1919, serving as a Captain’s valet on the HMAS Fantome. During this time he married Maria Baskerville. On his return he rejoined the railways, where he became a locomotive fireman. Percy and Maria had 8 children. Percy was a locomotive fireman until his retirement. He died in 1972. 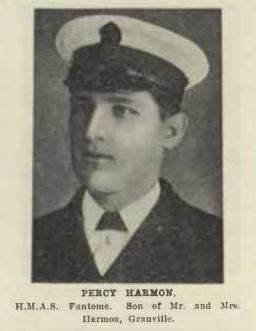 Frederick Harmon was born to Percy and Maria in 1926. He married Betty Gloria Lidden of Campbelltown, a graduate of the Conservatorium of Music, in 1951. They lived in Sturt Street Campbelltown. Frederick was the driver of the inaugural electric train to Campbelltown on Saturday May 4th.  The most recent information I could find out about Fred Harmon was that he was still living in Campbelltown in 1980 and was still a locomotive driver. Apparently he was a bit of a character, and when he and Betty divorced, he stayed on in Sturt Street.
Whilst the idea that a grandfather and grandson drove the first train and the first electric train into Campbelltown was a great one, the real story of the train driving Harmons is equally interesting.
Written by Claire Lynch
Sources
“Parramatta District Soldiers in the Great War”
Trove
Ancestry
Posted by Andrew Allen at 15:00